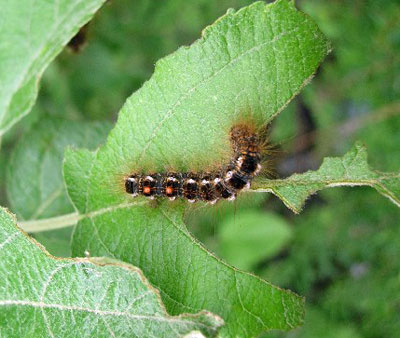 ­During the summer of 2007, England's population of brown-tailed moths was getting out of control, particularly in Spurn Point, a nature reserve in the Yorkshire area. Warm spring temperatures, combined with ample food sources, ­had allowed the moths to flourish. British scientists were worried. A female brown-tailed moth lays 200 to 300 eggs, and the moths and their caterpillars can decimate an area's vegetation.

­The moth boom was also affecting local residents. Brown-tailed moth larvae have numerous little hairs that cause a person to develop an uncomfortable rash should the hairs come into contact with his skin. These hairs can also get into a person's lungs and create breathing problems. To stem the blossoming moth population, scientists devised an unusual plan: They made the male moths gay.

At least, that's what some commentators have called it. In actuality, the male moths were the targets of some deliberate misdirection. Scientists dispersed powdered female hormones near the moths' mating areas. Once moth larvae hatched, they became covered in the powder, and the male moths subsequently mistook the larvae for female moths and tried to mate with them.

­The ruse worked because of the power of the hormones and because the moths, to put it simply, are rather unintelligent. A scientist involved in the project said that the pheromones don't affect other types of moths or b­utterflies [Source: The Times].

Despite some headlines stating otherwise, the moths were not actually made homosexual. But the story led us to look at some interesting examples of how sexuality and gender can be quite fluid among animals.

Some animals can have their sex altered simply by the environment around them. Scientists once changed male embryos of bearded dragon lizards into females by increasing the temperature in their incubation chambers. The temperature increase overrode the chromosome that normally determines gender in these lizards. The research showed that sex isn't solely determined by one factor (chromosome or temperature) but rather can be a product of multiple factors. The scientists involved expressed excitement that the process of sex assignment was much more complex than they thought, but also voiced concern that a warming climate may create drastic gender inequalities among some species of animals, especially certain reptiles.

Numerous studies have shown that chemical pollution can drastically change the anatomy and reproductive capabilities of many animals. One study showed that polluting chemicals off of the coast of Britain caused many male clams to produce both sperm and eggs, a condition called intersexuality. Scientists worry that the clams' intersexuality could lead to reproductive problems and harm the local ecosystem or that animals that eat the clams will begin to show similar effects. The researchers named a few possible sources of the chemicals, including fertilizers, estrogen from sewage runoff and estrogen produced by cattle at nearby farms.

Similar instances of chemically induced intersex, feminization and masculization have been seen in polar bears, frogs, alligators, flounder and up to 200 other animals, all of whom, scientists believe, have been affected by endocrine active substances (EAS). EAS are chemicals that mimic hormones and can disrupt the body's natural hormones, leading to potentially damaging physical changes that can inhibit reproduction and create deformed offspring. Scientists and wildlife activists have voiced concerns that these substances, which can be natural hormones like estrogen or artificial chemicals, will drastically disrupt the populations of these animals and those that feed on them.

Despite these challenges, animals have shown a remarkable variety of sexual adaptations and behaviors. On the next page, we'll take a closer look at animal sexuality and learn how the animal world is more diverse than many people think.