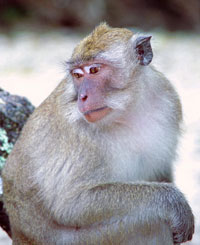 ­An October 2006 exhibition at the Oslo Natural History Museum in Oslo, Norway, focused on homosexuality among 51 animal species. The ­exhibition, which was the first of its kind, was devoted to showing that "homosexuality is a common and widespread phenomenon in the animal world" [Source: BBC News]. In fact, there are documented instances of homosexuality in 1,500 different animal species. A third of these species have been thoroughly studied. Some of these animals have lifelong same-sex partnerships.

In one article looking at the Oslo exhibition, an American anthropologist commented that the study of relationships among animals previously (and erroneously) focused on the idea that animals only mated to procreate and further the species [Source: MSNBC]. This assumption has been largely overturned. Not only do many animals participate in homosexual activity, but many animals -- of all sexual orientations -- engage in sex for pleasure.

Besides representing a source of pleasure, these non-procreative sexual interactions often provide benefits to the animal community. Animals of the same sex sometimes make sexual "alliances" to protect a community or dominate an area. In some groups, an animal's homosexual encounters ensure its place of dominance or its chances of reproducing later. Bonobos, humans' closest animal relative, are bisexual and much of their sexual activity is done for pleasure rather than procreation. Scientists say that bonobos' homosexual behavior produces closer social bonds [Source: National Geographic].

In some bird species, a homosexual couple raises the young. It can happen in a few ways. A male couple might drive a female away from her eggs and then treat them as their own. Or, a male might fertilize a female's eggs, but a pair of females will raise them. Finally, a female sometimes enters a male couple's nest, mates with them, lays her eggs and leaves the males to tend to the eggs. Up to 25 percent of black swan pairings work like this [Source: MSNBC].

These and the many other documented examples show that sexuality and even gender are very fluid (or nonexistent) concepts among animals. Some scientists argue that sexuality and gender may in fact be nothing more than human constructs. Consider young male dolphins and walruses, which engage in homosexual relationships when they're young but become heterosexual once they reach adulthood. Other animals are hermaphrodites, possessing both male and female reproductive organs. Some can "switch" genders (a concept that was employed in the movie "Jurassic Park"). Many animals don't have sex. Some divide in order to reproduce. Others "clone" themselves. Some sea creatures leave it to chance, expelling their sperm or eggs where they mix with those from other animals and fertilize in the open ocean. The great variety of animal life in the world has produced an equally wide array of sexual habits, gender roles and methods of socializing, while much remains to be learned about how many animals live, love and reproduce.