Is gender just a matter of choice? 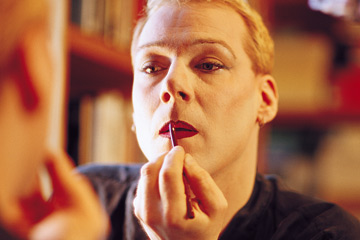 There are all sorts of old wives' tales about how to influence the biological sex of your unborn baby. Want a boy? Better eat some red meat. Want to paint the nursery pink? You should indulge in chocolate, and lots of it. And in these modern times, there are ways to scientifically pick the sex of your baby: Clinics that screen fertilized embryos for genetic diseases can also determine if the embryo is male or female, allowing parents to pick whether they'll have a boy or a girl.

These parents may be able to choose the biological sex of their baby, but there's no sure way to pick the gender. While sex is a biological definition, determined by factors such as chromosome count and genitalia, gender -- or the state of being male or female -- is a social construct. Different societies have different rules for how men and women should appear and behave. Women who wear dresses and bake cookies would be fulfilling the norms associated to that gender in our society; men who wear makeup and lingerie don't fit those norms.

People who don't fit into the set rules of a gender identity can make other people nervous and uncomfortable. We may want them to stop what they're doing and act the way we think they're supposed to act. As it turns out, the formation of a gender identity isn't well understood, but it's likely not a choice that someone can just change. A person's gender identity is probably shaped by a wealth of forces, including hormone levels, gene regulation, popular culture and family influences. The point at which people realize their gender is a matter that's still being debated by researchers. Some posit that gender identity is firmly fixed at a very young age; others argue that this identity can be very fluid for many years.

Most people identify with the gender that is aligned with their biological sex, but some people identify with the opposite gender, both genders or neither gender. These people might make a choice to reject traditional gender assignments -- a man who identifies as a woman may choose to dress that way. For some people, making these adjustments is enough of a compromise between their physical sex and their gender identity. Others, however, feel the need to make the physical parts match what's in their head, and these people may choose sexual reassignment surgery. If feelings of gender confusion go unaddressed, extreme depression may occur.

Gender identity disorder is the medical term used for people who identify with a gender that is different from their biological sex, and the condition is included in the current Diagnostic and Statistical Manual of Mental Disorders (DSM-IV). The classification of gender identity disorder as a mental disorder is controversial, because it implies that something is wrong with the person who has it, while he or she may only be seeking to make something right. But since our society tends to treat gender as a rigid, innate thing, there's little surprise that society doesn't know what to do with those who don't fit within its norms. So while people may not be able to change how they feel on the inside, they may have to perform their given gender to get along in society.