To witness male bisexual behavior in action, a trip to a bonobo habitat would suffice. The apes engage in sexual play with neighboring females and males alike as a form of conflict resolution [source: Doig]. That doesn't just entail occasional forays into the switching-hitting habit, either. Bonobo bisexuality helps explain how the apes instigate sexual activity every 90 minutes, an estimated 75 percent of which is for nonreproductive purposes [source: Owen].

For bonobos' human relatives, however, that type of behavior isn't as readily accepted. To start, the very term "bisexuality" is troublesome for some since it implies a sexual binary, a sharp divide between heterosexual and homosexual, rather than the spectrum espoused by Alfred Kinsey's Scale of Sexual Attraction [source: Angelides]. The bisexual orientation also has been fraught with legitimacy problems, often scrutinized as a faddish label people adopt for brief stints. Psychoanalyst Sigmund Freud, for instance, espoused the theory of innate bisexuality in which people are thought to be born with bisexual tendencies, which they inevitably grow out of in favor of hetero- or homosexuality [source: Haggerty]. In 1974, Newsweek snarkily headlined a report on it entitled "Bisexual Chic: Anyone Goes," hinting at freewheeling promiscuity rather than a bona fide sexual identity [source: Newsweek].

A couple decades later, Newsweek changed its tone dramatically, declaring in a 1995 cover story that a bisexual movement was afoot, though it couldn't project the size of the sexual community [source: Newsweek]. Conversely, a year earlier, leading gay publication The Advocate stole some wind from the bisexual sails when it published a survey reporting that 40 percent of gay men initially self-identified as bisexual, lending credence to notion of bisexuality as temporary [source: Carey]. Today, population survey analyses from the Williams Institute on Sexual Orientation Law and Public Policy derived a ballpark estimate of 1.7 percent, or roughly 4 million, American adults who openly identify as gay or lesbian [source: Leff]. Slightly more -- 1.8 percent -- label themselves bisexual [source: Leff].

As sexology has transitioned from surveys and self-reporting to more rigorously controlled laboratory settings, thanks to technological advances in measuring arousal, female bisexuality has been met with more empirical acceptance because bisexual female arousal patterns have been documented and replicated. Male bisexuality, on the other hand, has been caught in the scientific crosshairs because come to find out, whereas men possess statistically stronger sex drives, the directions they're steered tend to be more rigid and direct than what women experience. 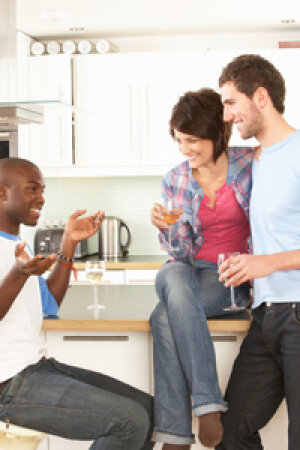