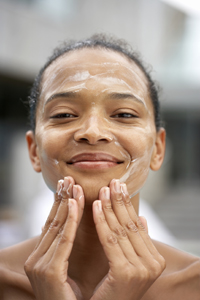 Could your popular face cream be dusted by angels?
Marili Forastieri/Getty Images

Cosmetics companies are required to list product ingredients in order of abundance, from the highest percentage to the lowest trace amounts, but not the actual amount of each. This loophole has created a way for manufacturers to creatively deceive the consumer by including trace amounts of a popular ingredient and then tout it on the label or in advertising campaigns. This is called angel dusting, also known as "fairy dusting" or "window dressing."

There are a couple of ways this typically goes down. A face cream may include trace amounts of something like shea butter, because the manufacturer knows that consumers respond well to that ingredient. While the company may not make any claims about what the shea butter will do for your face, it simply knows it's a popular or hot ingredient. The other scenario is a bit more nefarious. This is when a company will make direct (and true) claims about the cosmetic benefits of the ingredient, but only include miniscule amounts -- enough to get it listed on the label, and typically so that it isn't last on the list. This amount is also not enough to actually provide that cosmetic benefit, which is what makes it angel dusting.

So why would a company not just go ahead and include enough of the ingredient to provide the function it claims to? Because it's a financial matter. The ingredients being "dusted" on these products are expensive -- otherwise they would be in there in spades. When it's perfectly legal to add 1 percent of the ingredient at 1 percent of the cost, and still make claims about the benefits of that ingredient, it makes it an easy decision for the cosmetics company.