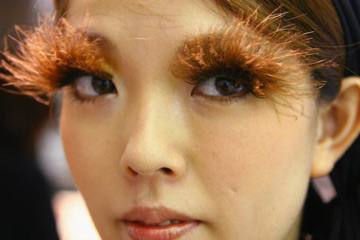 In 1916, director D.W. Griffith released the film "Intolerance." The movie was the most expensive film of its time, with Griffith using one-third of his $2 million budget on segments depicting Babylon in 539 B.C. [source: Dirks]. In filming those scenes, Griffith inadvertently gave birth to a fashion trend. He wanted actress Seena Owen, who was playing a Babylonian princess, to have a dramatic, wide-eyed look, so he hired a wigmaker to create eyelashes from human hair [source: Betts]. In addition to making a film that most critics consider to be the best of the silent movie era, D.W. Griffith also invented false eyelashes [sources: Dirks, Betts].

The theatrical, glamorous look that Griffith created is still in vogue today. There are times when a few simple strokes of mascara just won't cut it -- for example, when Jennifer Lopez attended the 2001 Academy Awards, one of the most elegant nights in Hollywood, she wore false eyelashes made of red fox fur [source: Roach]. Soon after, Madonna wore eyelashes made of mink and dusted with diamonds [source: Righton]. And when Oprah Winfrey got wind of Madonna's fashion statement, her makeup artist ordered 200 pairs [source: Roach].

The maker of these modern false eyelashes that have so enthralled the biggest entertainers of our time is Shu Uemura. Named for its founder, the Shu Uemura company is known for its trendy eyelash art and its 24-carat gold eyelash curlers. But the sensational look that fake eyelashes can create needn't be limited to Hollywood stars with full-time makeup artists. If you want to feel like a star, you need only head to an eyelash bar -- where eyelashes, not cocktails, are on the menu. 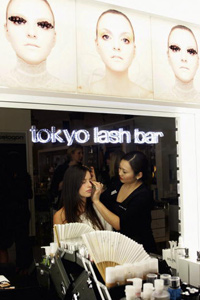 Getting glamorous at the opening of Tokyo Lash Bar in Sydney, Australia
Sergio Dionisio/Stringer/Getty Images

The Tokyo Lash Bar was a smashing success when it opened in the trendiest neighborhood in Tokyo, catering to everyone from the well-dressed wealthy to the teenagers with a little extra spending money. In 2005, Shu Uemura opened a Tokyo Lash Bar in Manhattan, and now, there are Tokyo Lash Bars in several cities around the U.S., as well as other eyelash bars opened by other cosmetics companies.

At a Tokyo Lash Bar, shoppers have dozens of eyelash styles to pick from. Some of the options are simple, realistic looking lashes that may retail for $20 to $30. However, if shoppers are willing to spend a little more, they can choose from jeweled lashes, beaded lashes, glittery lashes, peacock feather lashes or even lashes shaped to cast patterns across the wearer's face. Shu Uemura's 2009 line, for example, included Snow Twist, a lash style made from thin, white wires and dotted with crystals. Meant to emulate snow falling from the sky, Snow Twist retailed for $79 [source: Shu Uemura]. On the lower end of the cost scale, the 2009 line also included Lavender Bloom, which retails for $29 and is made of purple "fur-like materials" [source: Shu Uemura].

Once a shopper has selected his or her lashes (and men do show up to eyelash bars!), then a makeup artist will attach them. And not just once -- false eyelashes can be worn up to eight times, and shoppers need only return to Tokyo Lash Bar for a free re-application. If all those visits to Tokyo Lash Bars have you feeling like an expert, you could purchase the fake lashes and glue and go the do-it-yourself route. However, rumors abound of people gluing their eyelids closed, so when in doubt, head for the eyelash bar.