Facelifts: What You Need to Know

Browse the article Facelifts: What You Need to Know 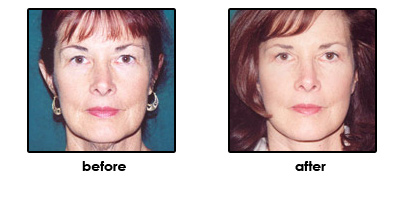 Nothing can stop the aging process. But for those with the money and motivation, cosmetic surgery can reverse at least some of the ravages of time. A lot of people are willing to pay a high price for a more youthful appearance. More than 150,000 people in the United States had a facelift in 2004, according to The American Society for Aesthetic Plastic Surgery [ref].

In this article, we'll see how plastic surgeons are offering up the promise of youth in the form of facelift surgery. We'll learn how the procedure is performed, how dramatic the results can be, and what risks are involved. But before getting into facelifts, let's look at how the skin on our faces age.

Skin goes through many changes as we get older. Cells divide slower. The dermis, or lower layer of skin, gets thinner. It is comprised of several different types of tissue, including elastin and collagen. Elastin gives the skin its elasticity, and collagen keeps the skin taut. Eventually both of these proteins begin to break down, causing the skin to loosen. The loss of elasticity makes the skin and underlying tissue more susceptible to the effects of gravity. Instead of springing back when pulled, the skin sags. Additionally, the muscle and tissue composition under the skin changes, leading to wrinkles.

A facelift can't completely erase the signs of age, and it can't fix all problems -- for example, sagging eyelids, eyebrows, or skin discoloration. To correct these problems, a patient would need to undergo other procedures (such as an eye lift, brow lift, or chemical peel).

In the next section, we'll learn exactly what happens during a facelift procedure.

Since each face has a unique shape and contour, the surgery will be slightly different for each patient. Before the procedure, the doctor will evaluate the patient's skin consistency and explain the surgery. People who smoke will be asked to stop at least a week or two before the surgery and stay off of cigarettes for a couple of weeks after the surgery, because smoking inhibits blood flow to the skin and can interfere with healing. Patients are also asked to avoid aspirin and other medications that can increase bleeding.

A facelift can be performed either in a plastic surgeon's office or in a hospital. Most patients are given a local anesthesia combined with a sedative, so that they are awake but unable to feel the procedure. Some doctors use general anesthesia, which puts the patient to sleep.

During a traditional facelift, the doctor makes an incision that typically begins around the hairline from the temple and curves around the earlobe, ending at the bottom of the hairline. The surgeon may also make a small incision under the chin to specifically tighten the skin of the neck.

The doctor first separates the skin from the fat and muscle underneath. He or she may suction out (via liposuction) or trim excess fat to give the face a sleeker look. Underneath the skin is a layer of tissue called the SMAS (superficial musculoaponeurotic system). The doctor tightens this layer by folding it -- pulling it back over itself. Tightening the SMAS layer lifts the cheeks, gives the jawline more definition, and firms the neck.

Finally, the doctor pulls the skin back up over the area and removes any excess skin with a knife or laser, similar to the way that you would pull a carpet to tighten it over the floor and trim the excess. The incision is closed with stitches, sutures, or tissue glue. The stitches are usually placed within the hairline so they are hidden by the hair.

The surgery can take between two to four hours, depending on the extent of the tissue and muscle work, and the number of different procedures being performed.

How much does it cost?

The surgeon's fee is typically about $5,000, and the entire procedure can range anywhere from $6,000 to $12,000 [ref]. It can be pricey, and because the facelift is a cosmetic procedure, most insurance companies won't cover the cost. But the results generally last for a long time -- 10-15 years. Non-surgical techniques are about a third of the price, but the results don't tend to last as long.

Other Types of Facelifts

In addition to the traditional facelift, there are a number of other techniques plastic surgeons use to give their patients a more youthful appearance. We'll discuss a few of them here.

The mini-lift is term is used to describe less-invasive procedures that use a smaller incision and work on a smaller area of the face than a traditional facelift. A type of mini-lift called the "weekend facelift" gets its name because many patients have the procedure on a Friday and return to work on a Monday. It is designed to improve the appearance of jowls and loose skin in the neck, but with less dramatic results than a true facelift. First, the doctor numbs the lower part of the patient's face with anesthesia. Then, during a one-to-two hour procedure, the doctor makes an S-shaped incision from the patient's sideburn, around the ear, toward the bottom of the hairline. The surgeon tightens the connective tissue under the skin, removes excess skin, and closes the incision with small sutures.

The S-lift works on just the lower third of the face, smoothing out the neck and jowls. After the doctor injects a local anesthetic into an area near the ear, the surgeon makes an S-shaped incision and separates the skin from the tissue underneath. When the skin is lifted, the underlying muscles and tissues are tightened. Because of the smaller area being worked on (and therefore the smaller incision), this technique takes less time than a traditional facelift, and the recovery time is shorter.

To perform the mid-facelift, the surgeon makes tiny incisions in the hairline above the patient's ear, as well as inside the mouth. During the procedure, the surgeon pulls the fat pads in the cheeks up and over the cheekbones to tighten sagging skin in the cheekbone area. Doctors often perform this procedure using an endoscope -- a tiny camera that allows the doctor to visualize the surgical area.

The tissue-glue facelift is not a different kind of facelift, but rather a different technique for closing the incision. Instead of sutures or stitches, the doctor may apply surgical glue (usually Fibrin Sealant) along the incision line. The glue acts as a vasoconstrictor, closing blood vessels to stop bleeding and seal the wound. This technique reportedly improves recovery time and reduces bruising. The body eventually rids itself of the sealant.

There are also facelift techniques that deal with a specific area of the face. An eyelift removes excess fat and loose skin to reduce the droopiness in the eyelids, while a browlift removes muscles and releases tissues in the forehead to raise the eyebrows and reduce frown lines.

In the next section we'll discuss some of the risks associated with facelift surgery.

Who are the Best Candidates for Facelifts?

The best candidates for facelifts are people who are experiencing some wrinkling and sagging in the skin of their face and neck, but whose skin still has some elasticity. The procedure works best on people in their 40s, 50s, and 60s, but it still can be effective on patients into their 80s.

Facelifts are recommended only for people of normal weight who are in good health. Those with certain conditions, such as blood clotting problems, uncontrolled high blood pressure, and the tendency to form large scars, should check with their primary care doctor before considering a facelift.

Just as with any surgery a facelift comes with some associated risks. These include:

In addition, people can die during facelift surgery. Some estimates put the rate at one death per 1,000 of these procedures [ref].

Patients may notice some facial bruising or swelling, but this should diminish within a few weeks. Some numbness of the skin is also normal, and similarly goes away within a few weeks. Although there may be some pain after the procedure, it is usually minimal and can be relieved by over-the-counter medications such as Tylenol. Some patients may be advised to elevate their head and remain still for a few days after surgery to reduce swelling. Patients will also need to avoid strenuous activities for several weeks and be very careful when out in the sun because it can damage the skin.

The results of a facelift are often dramatic, but they are never permanent. With time, those little wrinkles and saggy spots can return. Some people opt to have a second or even a third or fourth facelift to correct the problems. 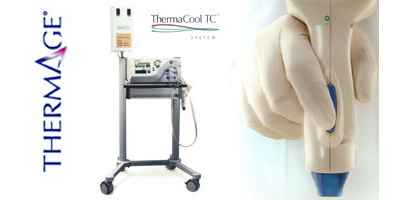 Some procedures can give results similar to those of facelifts, but without the cost and risks. Learn about these in the next section.

­ New techniques promise to rejuvenate and tighten the skin without surgery. These procedures cost far less than a traditional facelift, and come without many of the risks.

Thermage (or ThermaCool), approved by the Food & Drug Administration (FDA) in 2002, uses a radio frequency device to tighten the skin. It is best suited for younger candidates (in their 30s, 40s, or 50s) with slight wrinkles. The patient's skin is numbed with a cream, and then the heat of the radio frequency energy activates the skin's natural collagen, making the skin contract and tighten. The procedure costs around $2,000 and the results can last from six months to two years [ref].

Patients before and after getting Thermage treatment
Photo courtesy Thermage

ThreadLift, FeatherLift, and similar techniques use a special thread to boost drooping skin. The skin in the target area is first numbed with an anesthetic. Then the doctor inserts a needle and surgical thread (or a non-absorbable suture) into the skin. Just like sewing a piece of fabric together, when the thread is pulled tight, the muscle and tissue tighten with it. The procedure takes only about 30 minutes to perform and leaves no scars. The thread remains in the body. All the patient needs to do is to apply ice after the procedure to prevent swelling. The procedure costs around $400 per thread, and generally between two and eight threads are used [ref].

Botulinum toxin, or Botox, has become increasingly common in facial rejuvenation. Botox is injected under the surface of the skin and paralyzes the underlying muscles. It can be used to remove fine wrinkles, and is often used to enhance the look of other procedures such as skin resurfacing and filler injections. For more information on Botox, see How Botox Works.

Dermal filling agents can also be used to hide scars, remove fine lines, and reduce wrinkles. These materials are injected under the skin and can last for up to several months. In the United States, collagen purified from the tissues of cows is most the common dermal implant used to resurface the face. Other agents include human-derived collagen and synthetic materials. These products may be associated with less allergic reactions than cow tissue and may last just as long. In some cases, the patient's own fat and subcutaneous tissue can be removed during one type of procedure and used to resurface other areas. For example, small amounts of tissue removed during an abdominoplasty ("tummy tuck") can be used to add volume to the lips or fill in sunken areas below the eyes during a facelift procedure.

Lasers are used extensively is many medical procedures -- facelifts are no exception. There are many types and applications of lasers in dermatologic and plastic surgery procedures. Intense pulsed laser treatments, with or without radio frequency energy, is an excellent way to deal with varicose veins, redness, or sun-damaged areas. The results depend partly on the healing response of the patient, and thus can be very individual. Multiple treatments are often needed to achieve the desired results.

For lots more information on facelifts and related topics, check out the links on the next page.

Thank you to Scott Bernstein, MD, for his assistance with