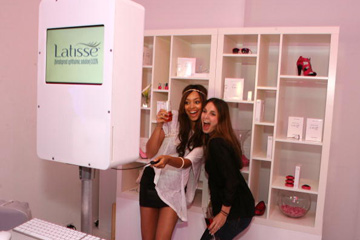 Latisse generated a lot of news in early 2009 as being the first prescription drug marketed to promote eyelash growth.
Casey Rodgers/WireImage/Getty Images

It's not uncommon for pharmaceutical companies to discover that a drug intended to treat one condition can be used for other purposes. That's the case with Latisse, a prescription drug people use to grow thicker, longer eyelashes. Latisse is a diluted version of another drug called Lumigan.

Pharmacists designed Lumigan to treat ocular hypotensive activity. The drug reduces pressure in the eyes -- an important part of treating conditions like glaucoma. The drug has several side effects including increased pigmentation of the eye and eyelid. It also tends to spur eyelash growth.

However, one drug's side effect is another drug's intended application. Latisse uses the same concentration of Lumigan's active ingredients to promote eyelash growth. With this growth comes the risk of suffering other side effects. People using Latisse may experience changes in pigmentation or their eyes may become itchy. In a worst-case scenario, their irises may turn a dark color after months of use. So far, doctors haven't found a way to reverse that change.

If you stop taking Latisse, the benefits will eventually disappear. And since it's not an over-the-counter drug, you'll need a doctor's prescription to purchase it. Don't expect medical insurance to pick up the tab either -- most insurance companies won't cover cosmetic treatments. And since Latisse costs about $120 for a month's supply, it's fairly pricey.

What's in this drug and how do you apply it?

A discussion of how Latisse works isn't complete without a look at its active ingredients. That's going to include some heavy-duty science jargon.

Like Lumigan, the active ingredient in Latisse is bimataprost, a synthetic prostamide analog. Prostamides are a kind of lipid -- a family of fatty molecules. Scientists are still trying to understand exactly how prostamide pharmacology works. While the effects of prostamides on ocular pressure are known, scientists are still exploring the actual mechanisms involved.

What that means is that bimataprost can help decrease pressure within the human eye. Scientists believe it does this by pushing out a substance in the eye called aqueous humor. This liquid fills the space between the cornea and the iris. If there's too much liquid, the resulting pressure can adversely affect vision.

Lumigan takes the form of eye drops, and glaucoma patients apply Lumigan to the appropriate eye once a day. Doctors observed several side effects from daily Lumigan use, including thicker eyelashes after several weeks. How does this happen? Scientists think bimataprost promotes a longer growth period for eyelashes and encourages more hairs to grow from the eyelid. Beyond that, the mechanism of the drug remains a mystery.

The side effect prompted Allergan, the company that produces Lumigan, to create Latisse. Unlike Lumigan, customers using Latisse apply the drug directly to the upper eyelid using an approved applicator. Since Latisse uses the same active ingredient as Lumigan, customers could experience similar side effects. That includes increased pigmentation of the eyelid as well as the risk of the iris itself growing darker. 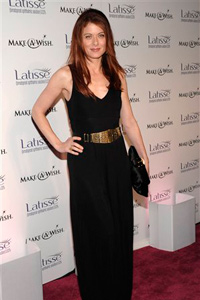 Actress Debra Messing at the Latisse launch party, March 26, 2009. It's not every day you see a celebrity launch party for a purportedly non-cosmetic drug.
AP Photo/Dan Steinberg

If you decide to use Latisse, you'll need to obtain a doctor's prescription first. Allergan's Web site for Latisse claims that the drug is meant for patients who suffer from hypotrichosis. That's the medical term for someone with an inadequate number of eyelashes. The site also says that Latisse isn't meant to replace mascara. But at the same time, the site promotes the drug with a gallery of before-and-after photos featuring celebrity Brooke Shields. The message may be somewhat mixed.

After obtaining and filling a prescription, you'll need to apply Latisse to your upper eyelids once a day. Allergan says that you can expect to see results in eight to 16 weeks after you begin your treatment. The reason it takes so long is that Latisse encourages new eyelashes to grow between existing eyelashes. The growth cycle takes several weeks.

Once your eyelashes have grown, you'll need to continue applying Latisse each day for maintenance. If you stop treating your eyes, the benefits will gradually go away over a course of weeks or months. Eventually, your lashes will look the way they did before you started treatment.

The drug isn't cheap -- it can cost up to $120 for one month's supply. And since most insurance companies won't cover drugs used for cosmetic purposes, you'll have to pay for Latisse out of pocket. Because of the cost and risk of side effects, Consumer Reports associate editor Kevin McCarthy cautions against adopting Latisse just to grow thicker eyelashes [source: McCarthy].

If you suffer from hypotrichosis, Latisse may be the right choice for you. But if you're just looking for a way to make your lashes look longer and thicker, you may wish to reconsider mascara.

Learn more about beauty and skin care through the links on the next page.

Are there medical reasons to get a tattoo?
Can vitamins protect my skin from the sun?
Is Botox safe for my skin?