Can you get spa treatments if you're pregnant? 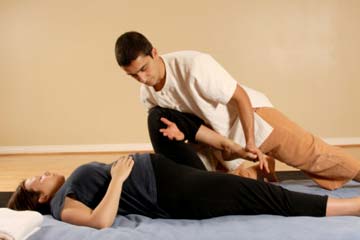 So while some spa indulgences are perfectly safe for pregnant women to sample, others are a very bad idea. Anything with chemicals, for example, is definitely ruled out. Hot baths, even if alternated with dips in a cool pool, are also unquestionably unacceptable, along with steam rooms, saunas, hot tubs, mud baths, hot waxes and body wraps, because they can all cause a dangerous rise in core body temperature. Typically, if the water turns your skin pink or makes you sweat, it's way too hot. If in doubt, use a thermometer to test the water temperature, and always pay attention to feelings of dizziness, faintness, clamminess, chills, extreme thirst, dry mouth or nausea. If you have any of these symptoms, exit the tub immediately and call your doctor.

Along with facility pools, pedicures can also be troublesome. Even the best spas experience challenges keeping their pools and pedicure equipment free of bacteria, so pregnant women are probably better off just skipping these particular spa services for a few months, or at the very least doing a thorough Q&A with the spa professionals to find out what precautions they take to keep things clean. Get them to clean everything right before you put your feet in, and consider bringing you own tools for them to use. Also, if you do decide to go ahead and get a pedicure, you'll probably want to skip the foot and calf massage because the nail technician will likely not be a pregnancy-trained reflexologist; hitting certain pressure points can trigger labor. If it's a manicure you're after, make sure the nail polish is free of any nasty controversial chemicals.

And while detox treatments might at first glance sound like a good idea to purify the soon-to-be-mother's body, they're not. The process of getting toxins out means that first they have to be released into the blood stream, and a woman who's expecting is not the only one dependent on that blood. Essential oils are also tricky. None should be used during the first trimester, and although some are all right later in the pregnancy, they need to be heavily diluted before being administered. Other ones, though, are still off limits because they can set off uterine contractions.

When it comes to hair removal, waxes and electrolysis are generally considered OK, although they may be more painful than usual because of sensitive skin issues. On the other hand, depilatories and bleaches should be absolutely avoided. They're absorbed into the skin and not enough studies have been conducted to test whether they have harmful effects.

And always remember, it's a good idea to consult a physician before trying anything that sounds like it might be a little too risqué for a pregnant women to partake in. For more information on spas and pregnancy, follow the links below.