Can you get addicted to tanning? 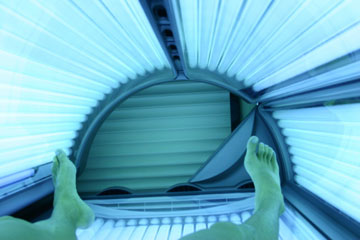 In the dark comedy TV series "Breaking Bad," mild-mannered high school chemistry teacher Walter White, who's discovered he has lung cancer and wants to provide for his family after he's gone, decides to set up a meth lab in a used Winnebago. Walt soon discovers that selling drugs to meth addicts isn't as simple as he'd assumed, despite their craving for his product. While the premise might not have been as comical, if Walt had wanted to find a legal way to profit from a dangerous addiction, he could have instead started another business -- a tanning salon.

You heard that right. True, tanning fiends generally don't shoplift and burglarize homes to subsidize their habits. But obsessive pursuit of the perfect golden-brown tan can ruin your health and even ultimately kill you, though the fatal skin cancers caused by excessive exposure to the sun can take years to develop. Moreover, growing scientific evidence shows that tanners develop a milder version of the drug addict's and alcoholic's desire for their poison -- similar to an eating disorder sufferer's obsession with being skinny. Scientists have even coined the term "tanorexia" to denote tanning addiction.

As it turns out, you can develop a jones for the ultraviolet radiation that causes your skin to turn brown. A 2006 study by Wake Forest University researchers found that exposure to UV radiation increases your body's production of endorphins, brain chemicals that have a morphinelike effect -- masking pain and producing a euphoric feeling. When researchers gave frequent tanners an opoid-blocking medication, it reduced their desire to lie in UV-spewing tanning beds. Additionally, about half of the frequent tanners reported nausea or jitteriness when they couldn't get their customary UV-stimulated endorphin fix [source: Science Daily].

Studies suggest that compulsive tanning is startlingly widespread, particularly among teens and people in their early twenties. A 2008 study of Virginia college students by researchers at Fox Chase Cancer Center concluded that 27 percent had symptoms of dependence upon tanning that were similar to symptoms in alcohol and drug-addicted people. The tanning addicts who showed an increasing craving for more and more UV exposure had difficulty controlling their time in the sun or their use of tanning beds, even though they knew its potentially harmful effects on their skin. While natural sunlight held a more powerful allure than the artificial kind, about 40 percent of the tanning addicts used tanning beds, which enabled them to get their fix even on cloudy days. Some even used tanning beds on sunny days [source: Science Daily].

The Fox Chase researchers found that those addicted to tanning were also more likely to be excessively thin and smoke cigarettes than other students. And those findings dovetail other research that shows excessive tanners are more likely to consume higher levels alcohol, marijuana and other illicit drugs [source: Gardner]. This research is significant because it suggests that UV junkies may have the same sort of mental problem -- that is, a brain genetically predisposed to addiction -- that drug addicts have.

For more information on tanning, check into the links on the next page.

How to Match Colors to Your Skin Tone
How to Give Yourself a Facial at Home
Is it safe to shave my forearms?