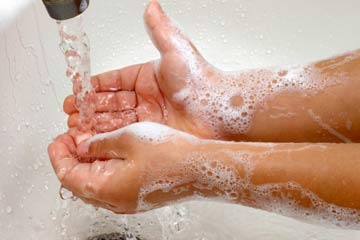 Washing your hands regularly helps to prevent the spread of infection and illness.
©iStockphoto.com/David Hernandez

We've all been there. You and a co-worker exit bathroom stalls at the same time. You -- ever diligent -- wash your hands. Your co-worker, however, smoothes his hair and walks out. He and others like him are the reason why you don't sample candy from the communal jar at the reception desk.

You might be wondering why it's such a big deal, but the truth is that hand washing is one of the best ways to prevent the spread of infection and illness. Not only does it keep germs from affecting you, but it stops any bacteria from getting passed to others and causing illnesses ranging from the common cold to the far more serious -- and sometimes fatal -- Escherichia coli and salmonella.

However, even people who understand the importance of washing theirs hands might not use a technique that's actually effective. Hand washing might seem as simple as rubbing your hands together under the stream of a faucet, but there are several elements to consider, including the how long you should spend washing, how often you should do it, what temperature water you should use and what to do once you're finished.

When you wash your hands, you should have a good idea about safe water temperatures and proper washing techniques. You should also know the best way to dry your hands to ensure you don't re-contaminate yourself after washing. But up next, you'll find out the best ways to prepare for hand washing.

Preparing to Wash Your Hands

You might not have given it much thought, but there are several factors to consider before washing your hands. Perhaps the most important one is to know when you should wash your hands. Mainly, you should wash them after you've come into contact with a large number of bacteria or viruses. For example, you should clean your hands after using the toilet, changing a diaper or handling waste because there are particularly nasty microbes -- including E. coli -- that exist in fecal matter.

You should also wash your hands whenever you're dealing with food, whether that means eating or preparing. In fact, you should wash your hands before and after preparing food, especially when handling raw meat or poultry. Take extra caution whenever dealing directly anything that could contain bacteria, viruses or anything else that could make you or someone else sick. Instances that require hand washing include:

Another important consideration when washing your hands is what type of soap you should use. Normal soap works by having two types of molecular components: hydrophilic (or water-attracting) molecules and hydrophobic (water-repelling) molecules. Once a lather is created, the hydrophobic molecules attach to the dirt and some bacteria on the skin, and they are rinsed away with water. Antibacterial soaps work similarly, except that they kill many types of bacteria instead of just washing them away. However, some scientists have found that antibacterial soaps show no extra benefits to normal soap. In fact, antibacterial soaps might kill only the weaker bacteria on the skin, leaving more powerful strains to breed, which can make bacteria more difficult to eliminate in the future [source: Mayo Clinic]. In any case, you should be using soap every time you wash your hands because it still helps more than water alone.

Now that you know when and with what to wash your hands, read on to learn why soap works better in some water temperatures than others.

Be sure to mark October 15 on your calendar: It's Global Hand Washing Day. The event focuses on children and schools and is meant to raise awareness around the world -- particularly in countries with limited access to sanitation -- about the importance of washing hands to prevent the spread of disease [source: Global Hand Washing Day].

You've probably been told that it's best to wash your hands in hot water because it helps to kill bacteria, but that is actually not the case. Adult skin can begin to scald at 120 degrees Fahrenheit (49 degrees Celsius), but studies have shown that hands washed using water up to that temperature still don't remove bacteria [source: American Burn Association, World Health Organization].

Even though warm water isn't killing any germs, experts commonly recommend it for two reasons. The first and somewhat less scientific reason is that it's usually more comfortable to use than cold water. The second is that many modern soaps are designed to be most effective in warm water [sources: Hand Washing for Life, Christophersen].

Another reason to avoid using hot water is that it can remove natural oils from the skin. This loss of oils can lead to dryness or even cracking of the skin. In some cases, people may even begin washing their hands less to avoid making these symptoms worse [source: Starobin]. In other words, it's important to use water that is warm but not uncomfortable.

It's worth mentioning that modern soaps are still effective at colder temperatures; so, if you don't have access to heated water, it's still better to wash with cold water and soap than with no soap at all [source: Hand Washing for Life].

With the proper water temperature in place, you're ready to move on to methods for washing your hands. Time matters here, so read on to learn a simple method of ticking off the seconds while you suds up.

Washing hands was shown to be effective in preventing the spread of disease in 1847, when a doctor in Vienna found that an illness attacking women in childbirth in hospitals was caused by infection, and that physician hand washing drastically lowered incidence of the disease. This discovery led to more sanitation in hospitals, which made other infections decrease and led to our hand washing practices today [source: Centers for Disease Control].

Even though you've probably been washing your hands for years, there are quite a few steps that most people either don't know or don't practice. For example, placing your hands under the water before adding soap can help you build up a lather for a better cleansing. Once your hands are lathered up, you should always wash them for at least 20 seconds, or the amount of time it takes you to sing "Happy Birthday" to yourself twice at a regular speed. You should rub your hands together vigorously, though you should be sure to spend some time cleaning your wrists, the backs of your hands, between your fingers and underneath your fingernails. Also, make sure to rinse your hands completely when you're done so that you don't leave a residue.

Once you're finished, it's important to make sure you avoid recontamination before leaving the sink. For example, if possible, use a towel or tissue to turn off the faucet and open the door so you avoid touching areas that typically hold a lot of germs, particularly in public restrooms [source: Centers for Disease Control and Prevention].

Now that your hands are nice and clean, there's still the problem of drying them off. On the next page, read about different ways to safely dry your hands.

Alcohol-based sanitizers are effective at killing germs and cleaning the hands if you find yourself without soap and water. When using hand sanitizer, put some of it in the palm of one hand, then rub your palms together -- spreading the gel over all of the surfaces of the hands. Because of the high alcohol content, hand sanitizer will quickly air dry, eliminating the need for towels. Although hand sanitizers are effective at cleaning bacteria from hands, they carry the same risks associated with antibacterial soaps: They don't kill all of the bacteria on the skin, so the remaining, stronger germs might breed and create strains that are more difficult to eliminate in the future [source: Mayo Clinic].

Now that your hands have been properly washed, you need to dry them without getting them dirty again in the process.

In many cases, particularly at home, it's difficult to avoid recontamination when drying because you're using the same hand towel repeatedly. This towel can contain the bacteria left in the water on hands from previous uses, and you may be putting them right back on your hands after taking the time to wash them. To properly dry your hands, be sure to either use disposable hand towels or change reusable ones frequently.

Most public restrooms have either disposable towels or hand driers, which blow warm air onto your hands and help to remove any remaining water. Be careful when pressing the button on the drier, since it could be contaminated. When turning it on, be sure to use a different, unexposed part of your body, such as an elbow.

It's amazing how something as simple as good hand washing can help to keep you healthy. Using the tips for when and how to decontaminate your digits should help keep bacteria and other germs at bay. Continue on to the next page for even more information on washing your hands.

Obsessive compulsive disorder, or OCD, is a mental condition in which a person must repeat specific tasks over and over in order to eliminate certain unwanted thoughts or anxieties. A very common symptom of OCD is a fear of germs or sickness, which sometimes leads the person to wash their hands repeatedly. He or she might have to repeat a certain ritual involved with hand washing a specific number of times, and severe cases of OCD can take up more than an hour of the person's day [source: WebMD].

How does fragrance work in skin cleansers?
What would happen if you never washed your face?
Genetically-customized Skin Cleansers