How does Frankincense work in skin cleansers? 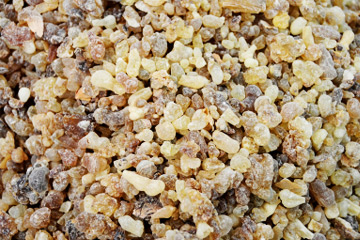 Some experts believe that the essential oil of frankincense may act as an anti-inflammatory. See more pictures of unusual skin care ingredients.
©iStockphoto.com/cenk unver

If you've been in markets that sell Middle Eastern or Indian products, you've probably come across the aroma of frankincense. Commonly used in those regions for centuries, frankincense is now a staple in many Western skin care products, as well. Some believe this ingredient has many potential health benefits, most of which are still being investigated by researchers. When used in cleansers, frankincense may have a positive effect on the skin.

Frankincense is a resin gum extracted from the bark of Boswellia trees, which are found mainly in the Middle East. It appears as a milky juice that becomes hard once exposed to the air [source: Encyclopedia Britannica]. Ancient cultures, including the ancient Egyptians, used frankincense in everything from incense used for religious ceremonies to medicines used to counteract poisons and other illnesses.

When frankincense is distilled into its essential oil and added to products, some skin care experts believe it can act as an anti-inflammatory. Thus, when used as a skin cleanser or toner, it may reduce skin irritations, like rashes [source: Roberts]. For overly dry and flaking skin, frankincense can have a soothing effect. Some evidence has shown it to reduce redness and scaling and improve dry patches in people who massage the essential oil into their skin regularly [source: University of Maryland Medical Center].

Those with aging skin sometimes use products with frankincense to help reduce fine lines and smooth out their complexions [source: Roberts]. It may also help reduce the appearance of scars. But even if you don't believe in the healing powers of frankincense, you might still find its sweet aroma pleasing -- this alone could make it great addition to your skin cleanser.

To learn more about skin care ingredients and techniques, check out the links on the next page.