How does mandarin work in skin cleansers? 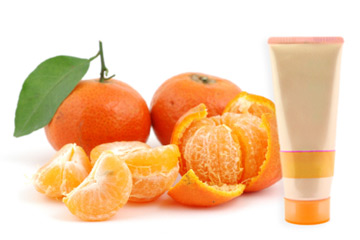 The essential oil of mandarins, which smells like oranges, is generally safe to use in skin products. See more pictures of unusual skin care ingredients.
©iStockphoto.com/Norman Chan/oonal

Mandarin is more than just a Chinese dialect. It also happens to be a small citrus fruit found in southern China. The mandarin fruit is similar to an orange, grows on trees and can be enjoyed as a healthy snack. Its peels can also be cold pressed to produce mandarin oil, a common ingredient in many skin cleansers [source: Britannica].

It's not surprising that the oils derived from citrus fruits are often found in cosmetic products. Most people like the way they smell. Throwing a few peels down your garbage disposal, for example, can help rid it of any nasty fragrances that might be lingering. Like other citrus fruits, mandarin is used in soap and other skin cleansers because of its aromatic properties. The oil produced from its peels is sweet and smells like oranges. Many people often confuse mandarins and clementines because of the way they look, but when it comes to the fragrance of their oils, there's actually a big difference. Clementine oil smells more like the spice coriander than mandarin oil does [source: Jensen]. Mandarin oil is also used as an aromatherapy ingredient in skin care, but there haven't been many studies to determine whether it's effective as such.

According to the FDA, mandarin oil is generally safe to use in food and on your skin in small doses [source: Environmental Working Group]. That's probably why it's as prevalent in flavoring agents and perfumes as it is in skin cleansers. Don't be surprised if one or more of your cleaning products contain it, too. If you like its aroma, you can look for it in product ingredients, and if you don't, then you'll be able to avoid it. Either way, now you know what it's for.

Check out the links on the next page for more info on caring for your skin.

How does lavender work in skin cleansers?
Are bubble baths good for my skin?
Can I wash my face too much?