How does myrrh work in skin cleansers? 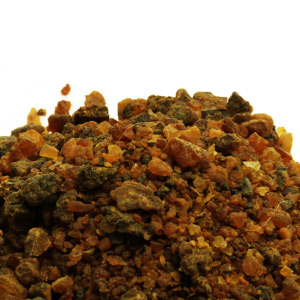 If you're familiar with the Christmas story, then you've probably heard of myrrh -- it was one of the gifts that the three wise men brought to Jesus. Its presence in the Bible not only gives us an idea of myrrh's importance, but it also sheds some light on how long myrrh has been around. It can actually be traced all the way back to ancient Egypt, where it was used for embalming, among other things [source: Calmet]. Today myrrh continues to be used as incense just like it was in the Bible, but it's also used as a fragrance in perfumes and cleansers.

Myrrh is taken from Commiphora myrrha trees, which are commonly found in the Arabian Peninsula. It's harvested as dried sap and has a sweet, woody fragrance. This aroma becomes most obvious when myrrh is burned, which is why it makes such good incense. When myrrh undergoes steam distillation, an essential oil forms -- this oil is what's used in skin cleansers and perfumes [source: Britannica]. You might even have something in your bathroom right now that contains myrrh.

The uses of myrrh actually go beyond that of simple aromatics, though. The sap can also be used to make medicines that decrease inflammation and kill bacteria. Because of these properties, people have used myrrh to treat a wide range of ailments such as indigestion, asthma and sore throats. However, there's not enough scientific evidence to say for sure whether myrrh is effective in all these uses. Some people also experience side effects, like a skin rash, diarrhea or heart rate changes, if they ingest myrrh, and you shouldn't use it if you are pregnant. Myrrh can also interact with diabetes medications and medications used to slow blood clotting. But these are worst-case scenarios. In general, in the amounts contained in skin cleansers, myrrh is safe for most people [source: WebMD].

To find out more about the ingredients you're using on your skin, read on to the following page.