How is a non-soap bar different from soap?

Browse the article How is a non-soap bar different from soap? 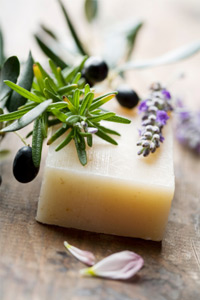 Washing the grit and grime of the day away is a simple enough task; the hard part is picking a cleanser from the scores lining store shelves. From soap on a rope to nubby beauty bars and everything imaginable in between, it's easy to feel overwhelmed and a bit perplexed by the vast amount of soap for sale. Plus, so many manufacturers are vying for your soap bar bucks and competing to convince you that their soap is supreme to all others.

If you're wondering where to start, you should also know that there are other options for cleansing products range besides soap -- you can also choose to go with a non-soap cleanser. Depending on your skin type, both kinds should get you clean. It's the specific set of ingredients in each kind, however, that set them apart. Basically, for a cleanser to be considered a soap, it has to be made of fats and oils, or fatty acids [source: Draelos]. Non-soap cleansers, also called synthetic detergents, or syndets for short, consist either partially or entirely of synthetic ingredients instead [source: The Soap and Detergent Association, Oakley].

Because both soap and non-soap will get you clean, if you want to figure out which is the best for your skin type, you should know how the chemistry of how each works. To learn more about these super suds, read on.

Chemistry of a Soap Bar

As a kid, using soap might have seemed magical. You lather it up and -- presto! Bubbles appear while dirt disappears. However, the real magic behind soap is a little more involved than that. Plant and animal ingredients form some of the basic building blocks of bar soap. The sources' fats or oils are combined with an alkali, such as sodium salt, resulting in a chemical reaction that creates true soap as a by-product, along with water and glycerin [source: The Soap and Detergent Association].

When it comes to how soap actually cleans your skin, think of it as a matchmaker of sorts. If you've ever tried to just rinse off with just plain water, you've probably noticed that it doesn't usually work very well. This happens because of surface tension that keeps water from spreading across the skin. You need some sort of cleansing product to remove dirt, excess oil and other impurities from your skin. That's where soap comes in.

At the molecular level, the true soap that's produced when fat and alkali react contains a hydrocarbon chain, which is basically just a strand of hydrogen and carbon atoms. One end is hydrophobic, which means it repels the water and is attracted to the dirt and oil on your skin. The other end is hydrophilic, which is attracted to water. When you lather up, the hydrophobic end attaches to all those unwanted impurities, and the hydrophilic end grabs hold of the water. This process allows the water to easily rinse away the dirt and oil, leaving you with clean, fresh skin.

But that isn't the only cleanser out there. Read on to see how the chemistry of non-soap products is different from soap.

Antibacterial soap has stormed the market in recent years as one of the most popular new creations in soap technology. However, studies have not shown antibacterial soap to be more effective in fighting germs than regular soap [source: National Institutes of Health]. Also, researchers have looked into the possible toxic side effects of the common antibacterial chemicals triclosan and triclocarban, but nothing has been found that's conclusive enough to take them off the market [source: Downs].

Chemistry of a Non-Soap Bar

It might sound odd, but you don't have to use soap to get clean. That's right; you can use a non-soap cleanser, instead. Non-soap products work on your skin in the same way that soap products do. The chemical compound attaches to the dirt and excess oil on your skin so that you can easily wash them off with water, leaving your skin free of soils and suds.

One key difference between the two, however, is that non-soap bars are created using synthetic chemicals, either as part or all of the ingredients. Some of the more common key players include fatty acids, petrochemicals or oleochemicals for the hydrophobic end, and other chemicals such as sulfur trioxide or ethylene oxide provide the hydrophilic action. Also, as with soap, alkalis such as sodium hydroxide are added to the chemicals to react, eventually ending up with non-soap bars [sources: The Soap and Detergent Association, Oakley].

Now that you know about the behind-the-scenes magic of soap and non-soap products, keep reading to find out more about the main show. How are soap bars different from non-soaps in affecting your skin?

Because people have used soap throughout history, you may wonder why non-soap was created. During World War I and II, the fats and oils from plants and animals were in short supply, which prompted people to come up with a soap alternative [source: The Soap and Detergent Association]. These products mainly were used to wash dishes and laundry, but eventually synthetic detergents became used in making bars and cleansers for the skin.

Benefits of a Soap Bar

When you look at a bar of soap, it might seem to be pretty simple -- you just add water, soap up and rinse off. But hidden inside that innocuous lump are a few advantages just waiting to bubble free when you lather up.

First off, soap bars can be excellent at getting your skin clean. They lather up well, allowing the soap and water to spread across the skin and attach to the dirt and oil, and the ingredients tend to be stronger than those in non-soap bars, so they generally do a better job at removing dirt, oil, makeup and any other impurities [source: P&G Beauty and Grooming]. However, because those ingredients are so strong, they often remove too much oil from the skin, stripping away its moisture barrier and leading to dryness. This can also irritate sensitive skin and further aggravate certain preexisting skin conditions. So, if you prefer to stick to soap bars, many health experts recommend following up with a moisturizer to add back that necessary moisture.

Cost might be another plus that soap bars have going for them. Soap bars are generally less expensive than those made with synthetic ingredients [source: Oakley]. Also, soaps have been made for centuries using natural ingredients, and many people choose to make their own at home, which might lower the cost even further.

Although soap is hard to beat in these categories, non-soap bars have advantages of their own. Read on to find out what they have to offer you.

With "green" thinking all the rage, it's tempting to buy into the idea that natural is always better for you. But just because a product includes natural ingredients doesn't automatically mean that it's going to be gentler for your skin. Natural herbs such as lavender and jasmine can cause allergic reactions in certain people just as synthetic ingredients can [source: Bouchez]. To avoid unpleasant skin reactions when you try out a new product, do a patch test on a small area of your skin before you slather it all over the place.

Benefits of a Non-Soap Bar

People have been using soap in various forms for thousands of years, so it might seem like a no-brainer to just go with the flow and keep doing things the same way. But non-soaps have their advantages over soaps.

A main advantage of non-soap bars is that they are formulated not to leave soap scum in hard water. In fact, one of the reasons non-soap products were developed was that soap doesn't do so well in hard water. Water is considered to be hard when it has minerals such as calcium and magnesium in it. The ingredients in soap react to those calcium and magnesium ions, and, as a result, they can leave behind a film on your skin and on your tub. With non-soap bars, you're less likely to wind up with soap scum from washing or bathing in hard water [sources: The Soap and Detergent Association, Oakley].

Non-soap bars are often gentler on the skin, too. They ingredients are milder and generally don't strip away excess oil, so you shouldn't have to worry as much about dry or irritated skin. Also, many health experts believe that the pH level of non-soap bars should be more compatible your skin's natural level. On the acidity-measuring scale of 0 to 14, skin usually has a pH of about 4.5 to 6.5, whereas soap tends to have a higher pH at about 9 or 10. In contrast, non-soap cleansers can be designed to have a specific pH that is closer to that of your skin. Some people say the difference in pH can have a negative impact on your skin, but the issue is still being researched, so the jury's still out on this one [source: Draelos].

Both soaps and non-soap cleansers will get you clean, so picking the perfect bar has more to do with personal preference than anything else. For more information on choosing the right soap for you, explore some of the links and articles on the next page.

The Dangers of Too Much Cleansing

Even if you use a non-soap cleanser that's formulated for sensitive skin, you can still cause skin irritation if you overdo it with too much cleaning. Among other things, scrubbing too hard or too much can aggravate skin conditions such as contact dermatitis, dry skin and acne. So, no matter what kind of cleanser you choose, try not to go overboard with the suds.