Quick Tips: How Can Baking Soda Benefit the Skin On Your Face? 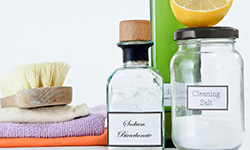 Baking soda may be a cheap, easy way to cleanse and exfoliate your skin.
©frannyanne/veer

Could that box of baking soda that's minimizing odors in your fridge double as a superstar skin-care product? According to an interview in the French Elle magazine, Emma Stone says she uses it to exfoliate her skin [source: TheDailyMail.uk]. She's not alone -- a whole slew of other uses for baking soda as a skin-care product are popping up all over the Internet.

Those on the baking soda bandwagon see its lack of chemicals and ability to buff away dead skin cells as a major improvement over conventional beauty products [Brown].

But does baking soda get the OK from dermatologists?

Dr. Joshua Fox, Medical Director of Advanced Dermatology P.C. and Dr. Jeffrey S. Dover, a Boston dermatologist and co-director of SkinCare Physicians, both said they've never used or recommended baking soda as an exfoliant to their dermatology clients. Dr. Fox says he uses sodium bicarbonate (aka baking soda) to help decrease the pain of an injection, which occurs because the anesthesia and skin's pH levels aren't balanced. But that's the only use he's had for baking soda in his practice.

However, according to TLC Planet Green's Josh Peterson, "Baking soda makes a top-notch exfoliation." He says it's because baking soda is "coarse, but not too coarse. It's the best amount of coarse for removing the top layer of dead skin cells, and if applied correctly, it won't cause your sensitive facial skin to become red and irritated." He likes the green aspect of using this for your face because it's not harmful to the environment. [source: HowStuffWorks.com]

If you want to use baking soda at home, try these two recipes.

Baking Soda as a Face Wash

1. Mix 2 teaspoons of baking soda and 1 teaspoon of warm water in a small bowl. Use a clean finger to stir the ingredients until a soft paste forms.

2. Splash your face thoroughly with warm water. Dip your fingers into the baking soda paste. Apply the paste to your wet face using a gentle circular motion. Cover your entire face with the paste.

3. Rinse your face thoroughly with warm water, splashing the water over the skin repeatedly until your face rinses clean. Pat your face dry with a clean towel. Don't let the exfoliating cleanser dry if you have sensitive or acne-prone skin. The granules are more abrasive when dry. Rinse the wet cleanser from your skin with water to clean and lightly exfoliate sensitive skin without irritating it. [source: SFGate.com]

Baking Soda as an Exfoliator

2. Rinse your face with warm water. Dip your fingers into the cleanser and apply it to your face and neck using a gentle circular motion. Let the paste dry on your skin for 5 minutes.

3. Buff away the dried cleanser by moving your fingers in a gentle circular motion. The dried paste exfoliates your skin as you buff it away.

4. Splash your face thoroughly with warm water to remove any remaining cleanser. Pat your face dry with a clean towel. [source: SFGate.com]

Bottom line: If you want to try baking soda as a natural exfoliant that's a cheap, eco-friendly alternative, go ahead and experiment. But if you experience a reaction, stop using it immediately.

What if I never took a bath?
How Body Soap Works
How does Ho Wood work in skin cleansers?