How does Roman Chamomile work in skin cleansers? 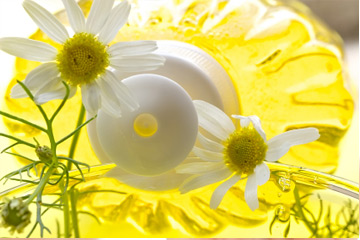 It's not uncommon to find ingredients that you would normally consume listed on the package of a skin care product. Take Roman chamomile, for example: The word "chamomile" usually conjures up images of a comforting, steaming mug of tea, but it's actually something that can help your skin look great, too.

The Roman chamomile plant is a small plant with grayish-green leaves and small white daisy-like flowers. Some people use its dried flowers in teas for a calming effect [source: National Cancer Institute]. This is the form of chamomile you may have seen in the spice or herb section of your local grocery store.

When Roman chamomile flowers undergo steam distillation, an essential oil forms. If you check the label of some of your skin care products, you are likely to see this oil -- perhaps just listed as "chamomile" -- listed among the ingredients. It is widely used in this way [source: University of Maryland Medical Center]. Experts believe that, when used topically in products like skin cleansers, Roman chamomile oil can help reduce dryness and itching, which may make it effective in treating conditions like eczema [source: Mesfun, University of Maryland Medical Center].

Some research has shown that Roman chamomile oil also acts as an antiseptic and an anti-inflammatory -- meaning it can soothe irritated and inflamed skin and reduces redness [source: University of Maryland Medical Center]. So products containing chamomile may work well on cuts and sores, as well as skin cracks, insect bites, bruises and perhaps even sunburns [source: Mesfun]. Some people use chamomile in aromatherapy, too, but there's not a lot of hard proof that it works in these cases.

To learn even more about how to care for your skin, check out the links on the next page.

Cleansing Creams 101
How to Cleanse Your Face for Cheap
Do certain cleansers cause itchiness?