How does trisodium etidronate work in cleansers? 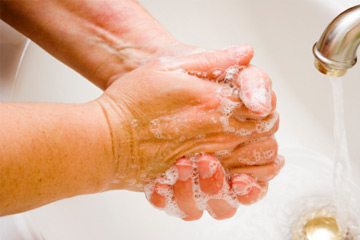 It takes many ingredients to make cleansers such as shampoo and soap effective. It's not as simple as it might seem, and how those ingredients work together actually has a lot to do with what's in your water. An ingredient commonly used to compensate for less-than-pure water is trisodium etidronate. Without it, getting clean could be a lot harder.

Etidronate is a salt that works as chelating agent, which is just a fancy way of saying that it softens water. You've probably heard the term "hard water" before. It's used to describe water that has absorbed minerals such as calcium and magnesium as a result of moving through the ground. Hard water isn't harmful to your health, but it makes your soap a lot less effective [source: Virginia Department of Health]. The reason is simple. Cleansers contain certain chemical compounds that are designed to lift dirt and oil off our skin, but those same compounds are strongly attracted to the metal ions in hard water. When they bond with those metal ions instead of the soil that makes you dirty, soap barely lathers up and becomes almost useless [source: Dawn Chemical, P&G Beauty and Grooming].

One answer to this problem is the chelating agent etidronate, in its forms such as trisodium, disodium and tetrasodium. Chelating agents work by grabbing onto the metal ions in hard water and neutralizing them. This in turn allows the other ingredients in cleansers to do their jobs more effectively [source: Parbhoo]. It's only a small piece of the puzzle, but it's an important one. In many cases, trisodium etidronate also pulls double duty as a preservative, allowing cleansers to maintain their color and scent longer [source: Patentstorm].

If you want to know more about how trisodium etidronate and other chelating agents work in cleansers, visit the links and articles on the next page.