Why is using a mild cleanser important? 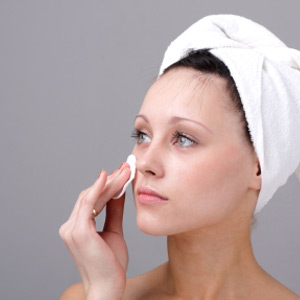 Getting Beautiful Skin Image Gallery Mild cleansers are a must for sensitive skin, but they can be beneficial to other types as well. See more pictures of ways to get beautiful skin.
©iStockphoto.com/Alexandr Stepanov

You know that it's important to wash your face, if only to avoid getting a face full of acne or looking like an oil slick. And if that were all that was important, any type of cleanser would do. For most cleaning jobs, the idea is to remove as much as possible. You wouldn't buy a window cleaner that advertised "mild" cleaning power or said it removed 50 percent of greasy fingerprints.

Your skin, however, has different needs. It protects you from the bacteria, dirt and pollutants in the environment, and part of its defense system is a layer of oil produced by the sebaceous glands in your skin. This oil is called sebum, and it helps prevent dirt and microorganisms from entering your body. Sebum also keeps the good oils -- the moisture that keeps your skin looking smooth and healthy -- from escaping.

Since your skin needs some oil, you have to achieve a balance when you cleanse it. It's important to get rid of dirt, dust, pollutants, microorganisms and dead skin cells while leaving behind enough sebum for your skin to stay healthy and keep doing its job.

That's the point of a mild cleanser: to remove the dirt and grime, dust and makeup. It also takes away excess sebum and the dead skin cells that have accumulated over time. But unlike a harsh soap, a mild cleanser will preserve some of the skin's layer of oil. This prevents your skin from drying out and becoming vulnerable to irritants.

For those who have "problem" skin -- oily, dry or irritated -- mild cleansers are even more important. In most cases, they won't make dry skin drier, and they won't further irritate already agitated skin. And, strange though it may sound, mild cleansers are even best for oily skin. People with oily skin are much more likely to over-cleanse by using harsh, drying soaps and vigorous scrubbing. This abrasive treatment may make skin produce even more oil.

For more information about mild cleansers, follow the links on the next page.

What if I never took a bath?
What moisturizers are used in body wash?
How does stearic acid work in skin cleansers?