5 Ways to Get Rid of Acne at Any Age 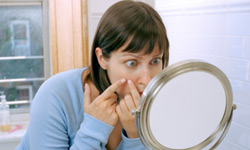 Acne can occur at any age.
Andreanna Lynn Seymore/Stockbyte/Getty Images

Acne does not discriminate when it comes to age. Though pimples are associated with the awkward teenage years, breakouts can occur in children under 10, previously blemish-free twentysomethings, expectant mothers, women approaching menopause and stressed-out adults of any age. Some people battle persistent acne throughout their lives, while others suffer temporary flare-ups due to hormonal changes, medication reactions, emotional strain or any number of other factors.

No matter how old you are, pimples, whiteheads and blackheads occur when sebum (oil) and dead skin cells plug the hair follicles, allowing bacteria to grow. But whether you're a despairing teenager or a grown-up with their first blemish, there are ways to stop this process in its tracks -- and prevent it from recurring. Find out how!