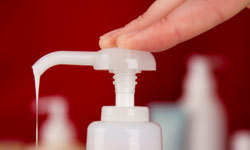 Some skin-firming lotions' claims may be overstated.
iStockphoto.com/Andrey Pastukhov

Sure we'd like to believe the claims on the scores of lotions and creams promising to firm up our skin and erase the damage done by late nights, too many drinks and the occasional cigarette. These are tempting propositions indeed, but these potions can't really turn back the clock and hide the inevitable signs of aging -- at least not permanently or significantly.

As we get older, we produce less collagen and elastin, the connective tissues that keep the skin firm and supple. Meanwhile, in approximately 80 percent of women (and a small percentage of men), fat deposits collect under the surface of the skin, creating an "orange peel" or "cottage cheese" appearance. Known as cellulite, this dimpling increases with age and may be caused by hormonal changes [source: Harmon]. Rapid weight loss can also contribute to loose, sagging skin.

Enter the growing throng of firming lotions and creams, which contain ingredients thought to tighten up the skin and restore elasticity. These include caffeine, retinol and dimethylaminoethanol (DMAE). Caffeine, a vasoconstrictor and diuretic, can make the skin appear smoother by dehydrating fat cells and dilating blood vessels, but its effect is temporary [source: Edgar]. Retinol, a derivative of vitamin A, can increase collagen production and thicken the skin, indirectly making cellulite less visible [source: ABC News]. Several small studies have suggested that DMAE, an antioxidant found naturally in fatty fish, plumps and firms skin by causing the muscles to contract, though some experts have questioned the safety of long-term use [source: Carmady].

Even if these ingredients do their job, however, dermatologists don't think they can penetrate enough to zap cellulite or permanently lift sagginess [source: Valdesolo]. For that, doctors say, more invasive treatments are necessary -- but not liposuction, which targets fat stores lying deep below the skin's surface. Some dermatologists and plastic surgeons swear by Cellulaze, a relatively new laser treatment thought to destroy dimple-causing connective fibers [source: Saint Louis]. Other doctor-administered cellulite therapies include subcision, in which a needle severs connective tissue between the fat bulges, and radiofrequency, which can decrease dimples for up to six months in some patients [source: Mayo Clinic].

The bottom line: As for loose, droopy skin due to aging or weight loss, plastic surgery will deliver much more dramatic and lasting results than even the priciest skin-firming tonic. Still, the ingredients that purport to firm skin -- especially retinol and its brawnier older siblings, the prescription-only retinoids -- can help stave off sagging before it becomes too severe [source: WebMD]. And be sure to keep moisturizing, since that alone can keep the skin supple and healthy-looking [source: Tsouderos].

For more information on cellulite, anti-aging treatments and skincare, check out the links on the next page.