Does the way you towel off after a shower affect your skin? 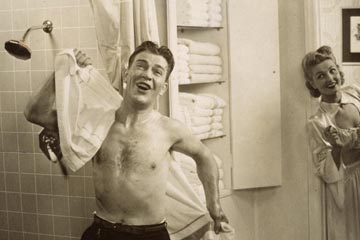 Good old towels! Having them around when you need them can put a smile on anybody's face.  See more personal hygiene pictures.
Victor Keppler/George Eastman House/Getty Images

Towels tend to be pretty unassuming bathroom accessories that never really receive much notice -- at least until you reach around the shower curtain and find your hand grasping at empty air. Then it's a real bummer unless another one is close at hand. It can be especially awkward if, say, you're visiting your elderly grandmother who's not in the best of health, or if you're liable to be intercepted by a herd of rampaging children who always seem to come racing around corners at the worst possible moments.

At times such as these, towels take on greater significance -- as you long for the fluffy, warm comfort of a cuddly towel, wishing the linen closet wasn't so far down the hallway. They can even seem like vital fixtures for any modern home. And towels have not been ignored by the entertainment industry, either; indeed, they've achieved a respectable level of cultural notoriety on several occasions. South Park fans are going to have to sit this one out, though; we're going a little more ageless and unforgettable than a talking towel with a drug problem.

In Douglas Adams' "Hitchhiker's Guide to the Galaxy" series, for example, towels assumed a role of great importance. Not only were they incredibly useful items to have along on any galactic adventure, they were also extremely valuable when it came to psychological ploys. Basically, as Adams described it, if a man has the wherewithal to keep tabs on his towel while struggling through a place as downright dangerous as the universe, then he is not someone you want to be messing with.

So while in "Hitchhiker's Guide to the Galaxy," towels were essential in all sorts of emergency situations, here on Earth we primarily use them just to dry ourselves off. But have you ever considered the possibility that you've been going about this seemingly simple task completely wrong for years? That the towel hanging so innocently on its rack might actually be having a negative impact on your skin?

It's true, experts recommend drying off with towels a certain way. Although towel usage usually doesn't top the list of things that can damage your skin (factors like smoking or getting too much sun tend to come in a little higher up), this could be information you need to be sure your skin doesn't sustain any more damage than it has to.

So don't panic! On the next page, we'll answer the ultimate question: Which is better for your skin, rubbing it dry or patting it dry?

The Softer Side of the Towel Debate 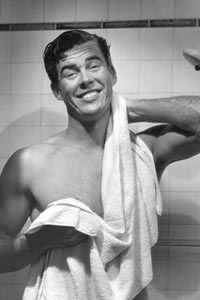 Relax and enjoy gently toweling yourself off.
George Marks/Retrofile/Getty Images

While some people vigorously towel themselves off to clear away any water or persistent suds as quickly as possible, others spend a few leisurely minutes gently patting their skin to soak up the excess.

As it turns out, according to the Mayo Clinic and the American Academy of Dermatology, patting is the way to go. You may enjoy the feel of a brisk towel-off, but your skin is less of a fan. This can be especially true if you have dry skin. The combination of rough chafing and efficient water removal can exacerbate dry skin issues. That's in part because moisturizers generally don't add any actual moisture to the skin. Instead, they lock in moisture that's already there, sometimes pulling it in from the surrounding environment. So for best results, lightly pat or blot your skin to leave some of that moisture behind.

You may have already guessed the next step experts recommend: It's time to moisturize. Whether or not people partake in intense moisturizing rituals, pretty much everyone has heard the news that adding a moisturizer into your daily morning routine is good for the skin. Now that you haven't toweled away every last drop of water left over from your recent shower or bath, it's a good idea to get out the creams and lotions immediately and start moisturizing -- within a matter of minutes, in fact, otherwise much of the remaining water will have evaporated.

And here are a few other quick tips that can help ease dry skin issues related to shower time:

To find out more ways you can keep your skin shipshape, slide over to the links on the next page.

Quick Tips: Does vegetarianism improve your skin?
Top 5 Tips for Choosing a Daily Facial Cleanser
Are Oral Acne Medications Good For Your Skin And Overall Health?