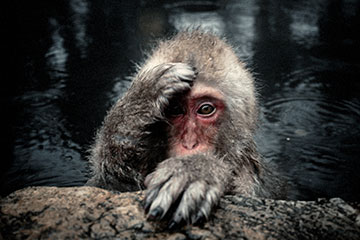 Almost all animals — and people — itch. But why?
moaan/Getty Images

Usually you itch, then you scratch. Then maybe you itch and scratch some more. Eventually, the flare-ups of itching subside. But for one woman in Massachusetts, the itching and scratching cycle didn't stop.

It started right after an episode of shingles and the constant itching on her head took over her life for years. No medication or treatment did anything to solve it. While she could sometimes manage to control the scratching during the day, she couldn't stop her hands from migrating to her head at night, tearing away at her skin. One morning, she woke up to a greenish fluid trickling down her face. She'd scratched through her skull and into her brain. You read that right: her brain. She recovered from that episode and after a few years of sleeping under restraints, taught her body not to scratch at night. But the itch was still there (as of 2008), and what causes it remains a mystery [source: Gawande].

In general, itching (also called pruritis) is a bit of a mystery because we don't know exactly why it happens. It's the sensation arising from the irritation of skin cells or nerve cells associated with the skin. Itching plays an important role in keeping us safe, as it can be a trigger to alert us to potential harm, such as a spider crawling on our leg.

Many things can cause us to itch: dermatological conditions, allergic reactions, even different types of psychosis. A treatment to help one type of itch may do nothing to alleviate another. For a long time, itching was thought to be a lesser version of pain, so scientists and doctors tended to focus their research on looking for a connection. While there's still some evidence to show the two sensations are close cousins, new studies show that itching is a beast of its own. We know very little about the mechanism of itching — how the skin talks to the brain and creates the itch.

Getting Under Your Skin

Pruriceptive is the most common type of itching. For the itch sensation to be triggered here, something mechanical, thermal or chemical has to stimulate the itch-sensing nerve endings on the skin, known as pruriceptors. These guys are super-sensitive. They can pick up an itchy sensation more than 3 inches away [source: Gawande].

Scientists have learned that for most types of pruriceptive itches, sensory nerve fibers called C-fibers get stimulated on the skin. They then send signals to the spinal cord and on to the brain, which generates a rubbing response reflexively from the person [source: Andrews].

The fibers are not quick to transmit the information, which is why itchiness can take so long to build up and subside. About 5 percent of the total C-fibers in human skin are connected to the itch mechanism, while many of the others are associated with pain (see sidebar on next page) [source: Andrews].

While that takes care of most itching, there are some more unusual types. Brachioradial pruritus, persistent outer-arm itching, is caused by a crimped nerve in the neck, and worsens in sunlight. Aquagenic pruritus, on the other hand, is recurrent and intense itching upon getting out of a shower. (That one is a symptom of a rare condition in which the body produces too many red blood cells.) [source: Gawande]

There is also itching that results from psychosis. People may have delusions that their skin is infested with parasites or crawling with bugs. So they scratch themselves all over.

Scientists have recently discovered the neurotransmitter that signals the brain to itch — natriuretic polypeptide b (Nppb). Nppb gets released when the skin is stimulated to itch. Interestingly, Nppb is a molecule that's produced by the heart to control blood pressure, so finding a way to suppress its release to stop itching could cause some pretty disastrous consequences [source: Lemonick]. 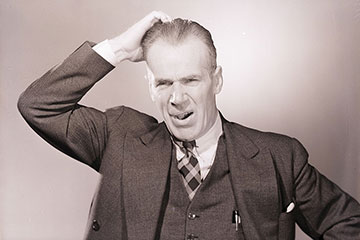 Studies show that watching someone scratch makes you want to do the same.
Bettmann/Getty Images

Almost all two- and four-legged animals scratch. Scientist even think that fish and fruit flies show behaviors that are probably associated with scratching when they rub up against objects (fish) or carry out robust grooming behaviors (fruit flies). But does scratching help anything?

Scratching interferes with sensations arising from pruriceptors by stimulating pain and touch receptors in same area. No one is really sure of the biochemical pathways that make scratching help the itch, but scientists have found that it has a compulsive effect on the brain. Scratching — even on places that don't itch — can activate areas of the brain associated with memory and pleasure, while at the same time suppressing those areas that are associated with pain [source: Cox].

Probably due to the way sensory nerves are distributed through the body, you get the most intense pleasure from scratching your back and ankles. And part of the key to having a scratch feel great is doing it yourself. Studies have shown that it is more rewarding to scratch your own itch than to have someone scratch it for you [source: Grady].

We can probably all agree that scratching an itch feels great. But, sadly, it's only temporary relief. Scratching can actually be more harmful than helpful if the skin becomes further irritated. So what else can you do to stop an itch?

Scientists had theorized that a set of neurons would produce an itch when activated slightly, but it would amplify up to pain when activated fully. However, after an experiment conducted in 1987, many have moved away from that idea. German researcher H.O. Handwerker continually exposed a team of volunteers to doses of histamine, an itch-producing substance. His thought was that as he increased the dose of histamine, the itch intensity would amplify to the point where it crossed over into pain. But it never did. Since then, scientists have proposed another theory where different cells trigger the different sensations, but that the signals then may interact in the spinal cord.

Putting an End to Itching 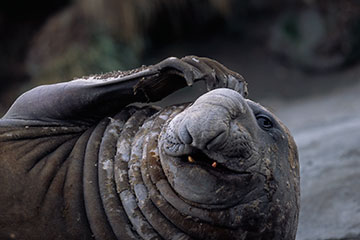 Even if you have no hands or legs, you can still enjoy a good scratch.
Paul A. Souders/Getty Images

Stopping the itch sensation is easier said than done. As we've said, itching can be due to all sorts of conditions. So you can imagine that with causes of itching ranging from a mosquito bite, to having a crimped nerve, to simply watching someone else scratch themselves, finding a cure or an end to itching is quite difficult.

So what's the best thing to do? Find out what type of itch you have to see if there's a treatment for it. You can use calamine lotion for poison ivy, hydrocortisone for eczema, or antihistamines for an allergic reaction to an insect bite.

You also can turn to your pantry for some home remedies to see if they'll do the trick. Grind up uncooked oatmeal and add it to your bath. Molecules in the oatmeal called avenanthramides block the release of inflammatory compounds, which hopefully can quell your itching. Rubbing baking soda on the skin has been known to soothe bug bites. And coconut oil has compounds that kill bacteria which can perpetuate and further aggravate an itch, especially when caused by eczema. Slather some of that on a couple times a day [source: Dog].

For psychosis-related itches, therapy might help. But how do you treat itching that is caused by some sort of neurological glitch? It's hard to determine how to handle these conditions when the underlying causes are not well understood. Antihistamines and corticosteroid treatments (like cortisone) don't work very well. Doctors currently prescribe local anesthetics that can inhibit neuronal excitability and advise their patients not to scratch [source: Oaklander].

That's actually the best advice for any type of itch, even though it's hard. Experts say to rub the spot gently, instead. That'll help the itch sensation diminish without the potential harms of scratching.

I can't count the number of times I reached up to scratch my head or my arm while writing this article. Firsthand evidence that contagious itching is actually a thing!

Why do elbows itch?
When you have an itch, what is happening under your skin?
Understanding Skin Allergies

Why do feet stink?
Which genetic factors affect skin?
How does curcumin benefit skin?