5 Medicines that Cause Sun Sensitivity

by Josh Clark
Prev NEXT
2 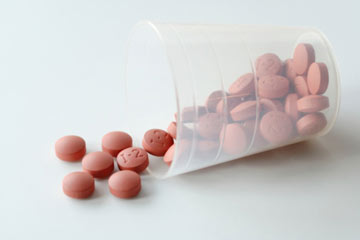 Remedies as commonplace as ibuprofen can be phototoxic. Take care when exposing yourself to the sun when using pain relievers such as these.
iStockphoto/Thinkstock

Non-steroidal anti-inflammatory drugs, called NSAIDs, include very common over-the-counter painkillers like ibuprofen (popularly sold as Advil and Motrin), ketoprofen (Orudis), naproxen (Aleve) and celecoxib (Celebrex). Despite the ubiquity of these medications, many users aren't aware that they can potentially cause either or both photoallergic and phototoxic reactions in them.

Ibuprofen, ketoprofen and naproxen can all produce phototoxic reactions in people taking them [source: Zhang]. Bad sunburn or some other skin irregularity while taking one of these NSAIDs could be a sign of phototoxicity. Both ketoprofen and celecoxib can produce photoallergic reactions in patients [source: Zhang]. As with any photoallergic reaction, presentation of symptoms like hives and rashes will show up about 24 to 72 hours after exposure to sunlight, which is the amount of time it takes for the body to mount an allergic response.