Why Do Bruises Change Colors as They Heal?

Browse the article Why Do Bruises Change Colors as They Heal? 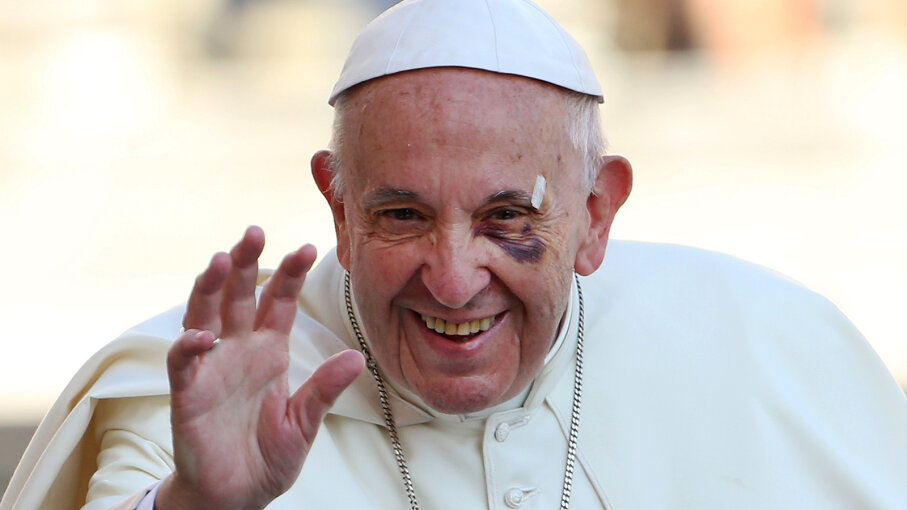 Pope Francis waves to his flock as he arrives in St. Peter's Square for his weekly mass in September 2017 in Vatican City. The pope suffered a black eye after hitting his head on the Popemobile when his vehicle stopped suddenly. Franco Origlia/Getty Images

They can be embarrassing reminders of less-than-graceful moments or a marks of profound pride: However you choose to view bruises, they're pretty fascinating. The variety of colorful patterns they create on the skin is reason enough to want to learn more about these weird, sometimes painful, spots that everyone has coped with at one point or another.

Otherwise known as a contusion, a bruise is a mark that appears when blood is trapped under the surface of the skin. Bruises occur when some type of trauma or injury crushes tiny blood vessels (known as capillaries), but doesn't break the skin. As a result of the injury, the broken capillaries leak out red blood cells, which get trapped under the skin, collecting in a pool that forms the blue/purple/red/black blemish.

"A bruise is an area of discolored skin on the body caused by a rupture of underlying blood vessels secondary to a blow or impact," explains Dr. Navya Mysore, a New York City-based primary care provider.

Bruises can feel tender when they first form, and can be accompanied by some swelling. They usually take about two weeks to heal, but some bruises can last months. During the healing period, the body breaks down and reabsorbs the pooled blood that produced the mark. As this happens, the color of the bruise can fade from dark to light and take on all kinds of interesting hues along the way.

End of the Rainbow

"Right after the injury, bruises are usually red or purple as it's the color of the blood that has pooled underneath the skin," Mysore says. "As the bruise heals, the body breaks down the blood that has accumulated under the skin from the broken vessels. As this happens, the bruise turns different colors varying from black, blue, green to yellow."

To break that down a bit: When a bruise first forms, it's usually some shade of red, thanks to the fresh blood just below the skin's surface. It takes about a day or two for hemoglobin (the protein that transports oxygen) to start imbuing the bruise with blue, purple or even black tones. Oxygen is what gives blood that red color in the first place, so when an injury causes hemoglobin to rapidly lose its oxygen, the red tone darkens and changes.

After a few more days, the mark usually fades to green or yellow before being hit with a hint of brown and fading away completely. This color change occurs as the body reuses the iron in the hemoglobin to form new red blood cells — the unused, decomposed hemoglobin transforms into a green pigment called biliverdin, which then converts into a yellow or light brown-tinged compound called bilirubin. As all these products are either reabsorbed or purged from the body, the mark fades and disappears.

Just about everyone gets bruises, but some people are more prone to them than others. Elderly people, for example, may be more likely to bruise due to thinner skin and softer tissue. Other factors, like certain diseases, medical conditions and medications, can also increase a person's risk for bruising.

So what do you do when you get a hickey, a shiner or any other form of contusion? Usually, time really does heal all wounds (eventually).

"Typically, mild bruises will resolve in a week," Mysore says. "More moderate to severe bruises can take two weeks to even a month to completely resolve. If the injury is forceful you can develop a hematoma, which is a solid swelling of clotted blood within the tissues and this can take many months to resolve but they do on their own."

And while there are plenty of urban myths and tales about how to magically banish bruises in a snap, the only legit healing method is to chill — literally and figuratively. "Rest the injured area as much as possible and apply ice to the bruise right after the injury happens," Mysore says. And if that isn't helping things move along, try applying some heat to increase blood flow and speed the healing process up a bit.

Now That's Interesting
If you find yourself constantly battling bruises, you might want to talk to a doctor to investigate whether you have a nutrient deficiency. Because your blood requires vitamin K to clot properly, if you don't have enough, you might bruise more easily. Vitamin C is also important to protect your blood vessels.