5 Foods That Can Change the Way You Smell

by Jonathan Atteberry
Prev NEXT
5 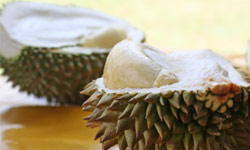 Want to eat a fruit so stinky it's banned in public places in some parts of the world? Try the durian.
Hemera/ThinkStock

The durian may be the only controversial fruit on the planet. If you love it, its savory, complex flavor and custardlike texture really make it measure up to its title of "king of fruits." But if you don't, its potent smell -- described as dirty laundry, a dumpster or moldy cheese -- can send you running. The durian smells so bad that it's been banned from public places in some parts of the world.

The fruits contain 39 volatile compounds, including sulfurous substances that are probably behind its piercing smell. If you eat one, your durian breath can hang on for hours.

Researcher Songpol Somsri of Thailand's Horticultural Research Institute has cultivated an odorless durian in an attempt to fight off the fruit's critics. And yet its devotees carry on, searching for ever-smellier durian in their quest for the perfect variety.