5 Foods That Can Change the Way You Smell

by Jonathan Atteberry
Prev NEXT
4 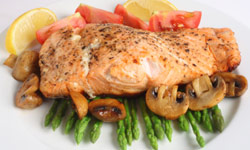 Whether you can smell it or not, asparagus gives you stinky pee.
iStockphoto/Thinkstock

Some foods give you bad breath. Others seem to seep out of your pores long after you've consumed them. And then there's asparagus, which has the dubious distinction of making your urine smell something like spoiled cabbage. As it turns out, exactly how this happens is still something of a mystery. Scientists have narrowed the list of suspects to a variety of tongue-twisting chemical compounds like S-methyl thioesters and methanethiol, but pinpointing the specific culprit is tricky business.

While there's still some debate about why asparagus gives your pee such a distinct odor, researchers have come to a consensus on one thing: Nobody is immune. That may surprise you if you're in the 60 to 80 percent of people who can gorge on asparagus and never catch a whiff of its aftereffect. In that case, you have your genes to thank. Folks who don't notice the odor of asparagus pee just don't have the ability to smell it.