What should men look for in face acne cleansers? 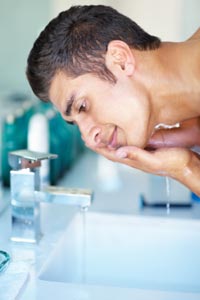 Nothing plagues a teenage life and self-esteem more than acne. At a time when social approval is so important and personal self-worth hangs in the balance, acne comes along to ruin everything. It can be especially hard for guys, as many facial cleansers are marketed and geared toward female consumers. And while girls are encouraged to use facial products and makeup to cover up acne, most guys don't feel comfortable using concealer to hide those blemishes (though some makeup products, like "The Men Pen," are made for guys).

What's worse is that some men struggle with acne even beyond adolescence. And although the acne might not be as severe, nor your self-esteem as easily hurt as it was in high school, it can still be embarrassing. So, many guys look for an acne cleanser to stop the problem before it starts. But how can consumers tell the difference between an effective acne remedy and mere overpriced soap that claims to improve complexion?

It starts with understanding what causes acne. Acne starts beneath the surface of your skin in a hair follicle, which receives sebum (oil) from an attaching sebaceous gland. Oil, which is good for your skin, is transported to the skin surface through the hair follicle. But androgen hormones can produce so much oil that it plugs up the pore (the opening at the surface of the skin), forming a microcomedo.

In time, pressure from the sebum buildup in the microcomedo causes the whole thing to blow up and expand, forming a comedo (plural, comedones). A comedo that breaks open is known as a blackhead, and one that stays below the surface is known as a whitehead. A bacterium known as Propionibacterum acne (P. acne) can then infect the comedo, causing inflammation.

Next, we'll explore how different acne cleansers treat the condition.

The good news is that you can do something about acne. The bad news is that some products that purportedly improve complexion actually make acne worse. For instance, cleansing scrubs and astringents, or most products that irritate your skin, will exacerbate the problem by making your face redder. And, in terms of washing, one might assume that more is better. But research has shown that washing your face twice a day is all you need. Any less won't be as effective, and any more could make acne worse.

Also, not all acne cleansers were created equal. Some kinds are better for certain skin types. An alcohol base is best for those with oily skin, while those cleansers with a cream, foam, ointment, aqueous or gel base are best for normal to dry skin. Lotions can work for any skin type.

But these bases will only constitute the inactive ingredients of a cleanser. They help the product apply easily, but don't have to do with controlling acne directly. On the other hand, the active ingredients in most over-the-counter acne cleansers can dry oil, kill the bacteria that causes inflammation of whiteheads and blackheads, and help get rid of dead skin.

Some of the most common active ingredients include benzoyl peroxide and salicylic acid, sulfur, and resorcinol. Other medications available over-the-counter include mild retinoids and alpha hydroxy acids (AHAs) such as glycolic acid. Prescription products can include oral antibiotics and stronger retinoids, most notably isotretinoin (Accutane).

Some of the acne medications are marketed specifically toward men, but other than the packaging, there isn't a significant difference in the products. Consider Proactiv, which is an acne medication containing benzoyle peroxide that became popular by its celebrity endorsements and infomercials. Proacitv is marketed to both females and males, evidenced by its celebrity endorsements from Jessica Simpson to Sean Combs.

Word to the Wise Man

One thing guys should watch out for is folliculitis, a condition similar to acne in which bacteria infects hair follicles. Shaving too closely can cause folliculitis. And athletes should beware  -- performance-enhancing drugs can also cause acne.

If washing your face twice daily with a gentle soap hasn't stopped your acne problem, you'll want to explore the acne cleansers available over-the-counter. But don't fall for promises on the front of the packaging -- take the time to turn it around and read the ingredients.

FDA regulations require companies to list their active ingredients, and one of the best things to look for in an acne cleanser is benzoyl peroxide. It's proven effective for many people because of its ability to kill P. acne, remove dead cells, and open and drain comedones. Benzoyl peroxide is available in varying concentrations, usually 2.5, 5 or 10 percent. Experts recommend starting off with low concentrations to avoid skin irritation (any of which should subside within a few weeks).

Another common ingredient is salicylic acid, which works by exfoliating the skin, or removing dead skin cells. However, some experts say that, on its own, low concentrations of salicylic acid that are available over-the-counter don't do much, but it can help the skin absorb benzoyl peroxide when they're used together.

Sulfur (historically used, but less common today) can open up clogged pores and remove P. acne, but it can also make skin dry and red. Other ingredients that work to unplug pores are resorcinol, retinol and glycolic acid. Still other ingredients may be included to reduce inflammation, such as green tea and niacinamide. And vitamin F can supposedly help regulate oil production.

But if you try these over-the-counter cleansers and find that your acne is still there, it's time to see a dermatologist. The doctor can prescribe more powerful medications, including oral medications, that are likely to work -- but they could come with notable side effects. Make sure to discuss these with your doctor before you start something new.

The Jury is Still Out

Many supposed acne remedies haven't been conclusively proven to work, and so have yet to reach FDA approval. As a result, products with these ingredients, like AHAs, retinol and green tea, are strategically labeled as "blemish fighting," "pore clearing or "skin calming."

What are the best skin cleansers for men with oily skin?
Does shaving oil moisturize my skin?
How can I cleanse my skin without drying it out?