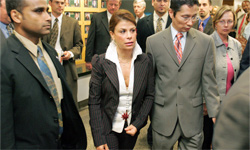 After Paula Abdul picked up a flesh-eating fungus that she said resulted from visiting a manicurist, she lobbied for cleaner nail salons.
AP Photo/Rich Pedroncelli

While the change in appearance is often permanent, some patients have found success taking zinc supplements. Over the course of several years, one Australian patient reversed the yellowing by regularly taking zinc orally [source: Arroyo and Cohen]. While zinc's effectiveness for treating yellow nails is up in the air, popping enough of the element has other benefits, such as preventing infection and helping night vision.

If you're looking for a treatment with some positive side effects, read on.