At a Glance: White Dots on Your Nails 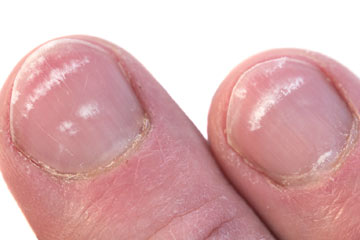 The occasional white spot on a nail typically isn't a clue to anything more than a bit of nail trauma.
©iStockphoto.com/David Schliepp

If the eyes are the windows to the soul, what might our nails be telling us?

While our nails may not be as expressive as our eyes, they may sometimes leave clues to health problems ranging from anemia to respiratory or cardiovascular diseases. But when we're talking about those small white spots on your nails, you probably don't need medical attention. The occasional white spot on a nail typically isn't a clue to anything more than a bit of nail trauma -- if you banged or pinched your finger recently, or have recently had a bad manicure, you might see these spots develop on the injured nail (it can sometimes take weeks for the spots to appear after the injury -- many of us don't recall hurting a nail by the time we see the spots develop).

These small, white dots are a common condition called leukonychia. Leukonychia is a discoloration of the nail plate -- that's your fingernail or toenail -- caused when the nail matrix (that's the base of your nail, where the nail grows from) is hurt. It typically occurs after a mild to moderate nail injury, and will disappear in a few weeks or months as your nail naturally grows out.

There are a few other things that may cause white spots on your nails:

Leukonychia usually only appears on one or a few nails at a time, depending on your injury. If white spots or streaks develop on all your nails, it could be a clue your body has an underlying serious condition such as cardiac disease, diabetes or kidney disease. Pale nails may be a clue you're anemic, and in rare cases, all-white nails may indicate liver disease.

Quick Tips: 5 Ways to Treat Cracked Nails
Why does nail polish remover have that smell?
Manicures 101