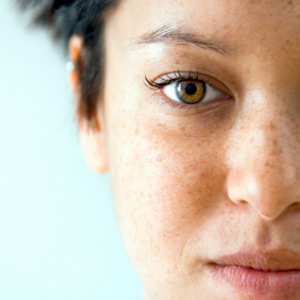 They're a distinguishing characteristic of famous redheads like Anne of Green Gables and the Weasley family, but you won't find freckles on redheads alone. Although people with red hair and light skin are more likely to have them, people of all different hair and skin colors can have freckles. Some children might think freckles are an awful thing to have, but many adults grow to love their freckles as part of their unique look and personality.

In simple terms, freckles are areas of the skin that have a little more pigment than the surrounding area. If your doctor ever mentions ephelides, don't worry -- that's just the medical term for freckles. There are two types of freckles: simple freckles and sunburn freckles. Simple freckles are usually small, about the size of the head of small nail, and they're basically harmless. They typically show up on the areas of your body that are exposed to the sun, most often your face. Simple freckles are darker in the summer than in the winter, and they can come in a range of colors, including red, tan, brown, black and yellow. All of the freckles on one person are usually uniform in color, though.

Sunburn freckles, on the other hand, don't fade in the winter like simple freckles do. Also known as lentingines, they can appear on your back and shoulders, and they're usually larger than simple freckles. They may also have irregular borders.

Even though freckles themselves are rarely something to worry about health-wise, the continued and increased appearance of freckles is an indication of how much sun exposure you're getting, and it can be a warning sign that you need to protect your skin more. Freckles are not usually cancerous, as moles sometimes can be, but you should see your doctor if their appearance changes drastically.

To find out why we have freckles and, if you don't like yours, how to hide them, keep reading.

So what exactly causes the appearance of freckles? Freckles appear when the melanin, the dark pigment in skin, isn't distributed evenly -- certain areas of the skin have more than others, and that's why they appear a little darker.

But what does sunlight have to do with the issue? If you're prone to freckles, you're more likely to have them the more you expose yourself to the sun. If you spend outside without sun protection, you'll probably notice the spots on your skin getting darker and multiplying. This happens when ultraviolet (UV) rays from the sun hit your skin. The outermost layer of your skin, the epidermis, thickens a little bit more. This in turn causes melanocytes, the pigment-producing cells in your skin, to produce more melanin, which can darken the freckles on your skin.

Sunlight isn't the only factor that influences freckles. If you have freckles, there's a good chance your parents and siblings have them, too. A combination of both sun exposure and genetics determine how those darker specks will pop up. People with light skin and light or red hair are more likely to have freckles than those with darker skin. Freckles usually appear on children, and they can start to show on people as young as one or two years old. Freckles develop in random places on the body, usually around areas that get the most sun exposure, such as the face and the arms.

Interestingly, research done among sets of twins shows that identical twins have nearly the same number of freckles. Freckles also tend up to show up in similar locations in twins, which gives evidence that freckles pass genetically [source: Alai].

Although freckles are normal, not everyone feels comfortable with them. If you've ever wondered if it's possible to get rid of your freckles, read the next page.

Another area in which scientists have advanced the study of freckles is through research of the disease xeroderma pigmentosum. Xeroderma pigmentosum is an extreme sensitivity to sunlight -- those who have it are at great risk of developing skin cancer when exposed to the sun [source: MedicineNet]. In people with this disease, the sun's UV rays damage the skin's DNA so that it can't be repaired. Xeroderma pigmentosum patients are usually heavily freckled and have dry skin, and they need to protect themselves from the sun at all times.

How to Get Rid of Freckles

If you talk to your doctor about getting rid of your freckles, he or she will probably tell you that there's no need to. Freckles are mostly harmless, and there's no real reason to treat them. However, if you're really unhappy with your appearance because of your freckles, there are a number of treatments that can help to get rid of them.

First, some topical creams, both over-the-counter and prescription, can lighten skin color and make it look more even. However, the active ingredient in these creams is hydroquinone, and doctors warn that creams with over 4 percent hydroquinone may increase your risk of cancer [source: Lloyd]. If you still decide to use one of these creams, apply it every day and you should see results in a few months.

Another, more extreme method of getting rid of freckles is cryosurgery, in which a doctor uses liquid nitrogen to freeze them off. Also available are laser treatments, photofacials, chemical peels and intense pulsed light (IPL) therapy, the latter of which uses light energy to target skin cells that have color in them.

It might be difficult to get rid of the freckles you already have, but it's not so hard to prevent more from appearing. One way you can do this is by protecting yourself from the sun. Avoid being outside during peak sunlight hours, between 10 a.m. and 4 p.m. If you do need to be outside, make sure that you wear sunscreen with a sun protection factor, or SPF, of at least 15 [source: American Academy of Dermatology]. Try to wear protective clothing that covers your arms and legs. Not only will taking these steps help prevent freckles, it'll help prevent skin cancer as well.

If you don't want to take a drastic step to remove your freckles, read on to find out how to hide them.

Although neither freckles nor moles are usually cancerous, you should check both often to make sure you haven't developed skin cancer. If you notice any changes in size, shape or color, or if a freckle or mole becomes painful, you should talk to your doctor. Some of the risk factors of skin cancer include having red or blond hair and light skin, having an immediate family member with the disease, and experiencing too much sun exposure at a young age [source: Aetna].

How to Hide Freckles

Most likely, a doctor will suggest trying to accept and embrace your freckles as part of who you are. If you have a big event coming up, though, and you're hoping to hide your freckles without necessarily having to get rid of them, there are a few ways to do so.

The first and most obvious way to hide freckles is with makeup -- any type of cosmetic like cover-up, foundation or concealer will work. Makeup can be inexpensive, and it won't harm your skin unless you're allergic to it. And since you can simply wipe off makeup, it's a temporary way to hide your freckles. Some makeup companies also make creams with mulberry and bearberry extracts, and doctors tend to recommend these over hydroquinone creams if you want to lighten your freckles [source: Lloyd].

Some people try to hide their freckles using home remedies. A popular way, for instance, is to put lemon juice on your skin so that freckles will lighten in the sun. There is little scientific evidence to back up most of these remedies, and they may work for some people and not for others.

Freckles may fade with time, especially when you limit your exposure to the sun. Be sure you're always wearing sunscreen or sunblock when exposing your skin. Not only will it help keep your skin safe, but it may keep your freckles from darkening.

Freckles are a natural physical characteristic of many people, especially those with light skin or hair. And as far as skin conditions go, they're among the most harmless marks you could have. But if you're not a fan of them, now you know how to eliminate or hide your freckles. For more information about freckles and skin care, follow the links on the next page.

When choosing a makeup to hide the freckles on your face, use a sponge to blend the makeup with gentle pats -- don't rub, or the makeup will simply come off.