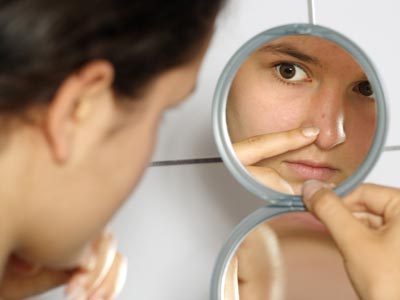 How can you get rid of annoying red blotches?
©iStockphoto.com/sumnersgraphicsinc

You catch a glimpse of yourself in the mirror and, what is that, a pimple? Chances are good it is -- an estimated 17 million of your fellow Americans are also scrutinizing acne in their mirrors [source: Nemours]. But look a little closer at that red spot -- it may not be a pimple at all, but rather red, inflamed skin. If you suffer from red blotches on your face, you might be tempted to blame it on the elusive conditions of sensitive skin and cover up your skin's blotchy appearance with makeup, but do your skin a favor and hunt down the reason your skin is red to begin with.

There are a few common reasons we find ourselves with red, blotchy skin. First let's talk about sun damage and sun exposure. You're familiar with sunburn, sometimes despite your best sunscreen-applying efforts. But for some people, exposure to sunlight can cause a red rash and blotchy, scaly skin -- this is called photosensitivity, and is can be caused by an immunological response (it's a sun allergy). Some medications including oral contraceptives, antihistamines and some types of antibiotics can also cause sun sensitivity, as can some exfoliating and anti-aging skin care products.

And speaking of those skin care products, they may cause even more trouble than photosensitivity. Allergic reactions to something touching your face, such as a skin care or makeup product, or even your laundry detergent may the cause of a bout of red, blotchy skin. Test yourself at home by applying products to the inside of your wrist or elbow to see if your skin reacts -- if your products pass the at-home test but you still suspect an allergy, visit your dermatologist or allergist for additional testing.

And still sometimes it's not an allergy to a skin care product that's causing the redness but rather the harshness of the ingredients in your favorite skin products and treatments. For example, popular skin treatments including topical retinoid creams, chemical peels, and microdermabrasion contain ingredients that can strip away the skin's protective barrier and cause irritation.

There are also skin conditions that can cause red blotches to appear on your face.

Rosacea, for example, is a skin condition that affects adults, usually some time after your 30th birthday. It's often mistaken for adult acne, but these red bumps are also accompanied by a flushed and red face as well as burning, irritated skin. The condition may also cause telangiectasia, which is the medical term for those spider-like veins and blood vessels that you can sometimes see on your face, in addition to a red, bulbous nose.

Another skin condition that may be at the root of your red blotchy face is eczema. Eczema is what we call any inflammatory skin condition or dermatitis, and it can appear because of several different causes. In all its forms it appears as an itchy, red and bumpy rash that may have weeping, scaly and crusty lesions. Types of eczematous dermatitis include atopic dermatitis, which about one to two percent of American adults have (the condition is genetic, and is usually a problem beginning in childhood), allergic contact dermatitis (eczema caused by an allergic reaction), seborrheic dermatitis (which you better as dandruff) among other forms that appear on specific parts of the body. Other causes of eczema include poison ivy, fungal infections and scabies [source: Cole].