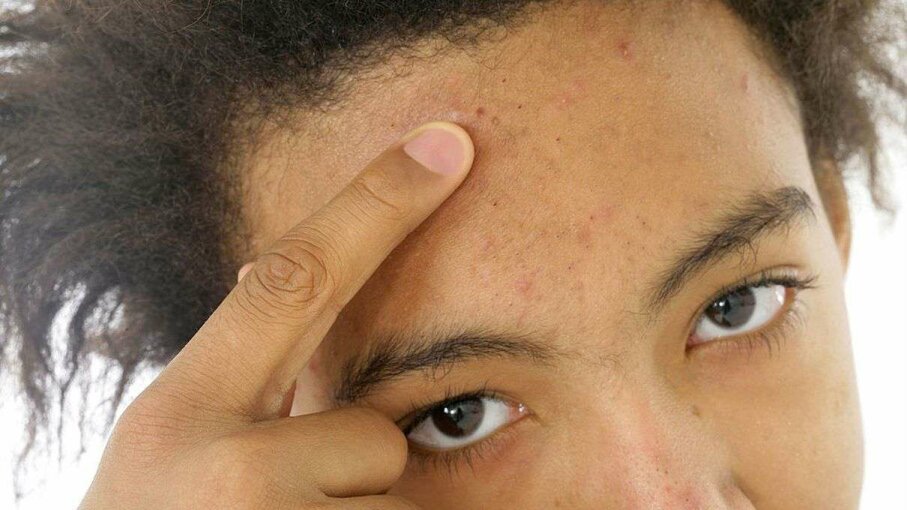 Scientists have discovered that telomeres, which slow down aging, were prevalent in people with acne. BSIP/UIG Via Getty Images

If you're one of the jillions of people who endured acne as a teenager — or are still living with it — take heart. Looks like you'll have the last laugh as you age. You'll stay younger-looking longer than your clear-skinned friends. Scientists have long recognized that people with acne have fewer wrinkles and less thinning of skin than those who sail through adolescence on a sea of smooth, blemish-free skin. Some thought this was due to increased oil production. Now, they may have found another reason.

In a study of 1,205 sets of female twins, 25 percent of whom self-reported having had acne, researchers in the U.K. found that the women with acne had significantly longer white blood cell telomeres (aka chromosome caps) than women with clearer skin. Telomeres keep cells from dying leading to less appearance of aging for those fortunate enough to have been born with those longer telomeres.

Much like a plastic protector covers the end of your shoelace, telomeres keep chromosome ends from fraying, which keeps an organism's genetic information intact. Without telomeres, cells could not divide without losing genes. However, as cells divide, which they do throughout our lives to replenish skin and other organs, telomeres shrink. Once telomeres are too small, cells stop dividing and our skin (and other organs) begin to degrade. The shortening of telomeres has not only been linked to aging, but also to cancer and increased risk of death.

"For many years dermatologists have identified that the skin of acne sufferers appears to age more slowly than in those who have not experienced any acne in their lifetime," said Simone Ribero, a dermatologist from the Department of Twin Research and Genetic Epidemiology at King's College in London and the lead author of this study, in a press release. "Whilst this has been observed in clinical settings, the cause of this was previously unclear.

"Our findings suggest that the cause could be linked to the length of telomeres which appears to be different in acne sufferers and means their cells may be protected against ageing." The study did not show a causal relationship between telomeres and aging and since all the participants were women, more research would need to be done on men.

The researchers also looked at gene expression. This process translates encoded information inside the gene into protein or RNA structures to be used in the cell. The scientists were looking for possible gene pathways, or actions among molecules that lead to changes in the cell, linked to acne.

One pathway regulates cell death, which can make you look older. This  p53 gene pathway was found to be expressed less in people who said they'd had acne."I think it's fascinating that they found that the telomeres were elongated in these acne patients," says Diane Madfes, an assistant professor of dermatology at the Icahn School of Medicine at Mount Sinai in New York, who was not involved in the research. "That's the holy grail – trying to find out the genes that are involved with aging."

To determine that telomere length was significant,, researchers accounted for and ruled out other factors including participant age, weight and height,. They found that women who reported having had acne had telomeres with an average length of 7.17 kilobases, while women without acne showed an average length of 6.92 – a noticeable difference in length. A kilobase is a unit of measurement of the length of a DNA or RNA sequence.

So, is it possible to grow our telomeres to help us all stay younger-looking longer?

"You can't grow telomeres – yet," Madfes says. "Many studies are looking at ways to protect our chromosome ends, but for now genetics plays the most important role."

For folks who have shorter telomeres and may be looking at wrinkles and thin skin, some good news might be on the horizon. Scientists in Brazil and the U.S. believe they've found a way to increase the production of telomerase. It's not quite the fountain of youth, but it could eventually allow people to live longer, healthier lives – and look good while doing it.

Now That's Interesting
Scientists may have discovered a way to stop telomeres from shrinking, which could not only help all of us look younger longer, but could also have important implications in age-related diseases and cancer.