by Josh Clark
Prev NEXT
3 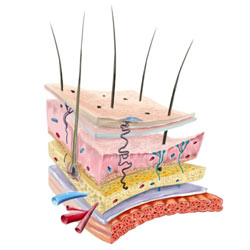 In healthy skin, newer skin cells replace old ones, which shed. Patients with lamellar ichthyosis produce healthy skin cells but lack the ability to shed them, leading to scaly plates across their bodies.
Hemera/Thinkstock

In healthy people, old cells protect young cells before shedding and being replaced. Beneath the stratum corneum (outer layer), skin cells known as keratinocytes divide to form healthy new cells. As they age and die, keratinocytes harden and migrate toward the stratum corneum to form a protective barrier. Eventually, they're shed as newly hardened cells replace them. In lamellar ichthyosis, the skin cells of the patient develop normally, but as they harden and migrate to the stratum corneum they don't separate, which prevents them from shedding. Eventually the dead skin cells build up and form the hard, scaly plates that cover the body and characterize lamellar ichthyosis [source: WebMD].

The condition is rare. Generally, patients develop symptoms in early childhood or may be born with scales. The symptoms may disappear during most of adulthood and reappear later in life [source: Mayo Clinic].