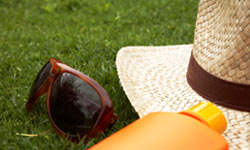 The sun is a wonderful thing: It offers energy, light, a boost to mental health, and Vitamin D. It's the key to much of life on Earth. But sunlight is also one of the chief causes of skin cancer. What's in sunlight that's potentially dangerous? It's that pesky, invisible specter called ultraviolet light.

No cancer is more common in the United States than skin cancer. There are more than 1 million cases of skin cancer diagnosed annually [source: American Cancer Society]. And there are many types of cancer that affect the skin -- more than 200 [source: California Department of Public Health].

Sunlight isn't the only culprit -- there are several risk factors that could increase your likelihood of developing skin cancer, including the following:

Among the various types of skin cancer, melanoma is the third most prevalent type. As a malignant cancer, it's very dangerous: In 2005, 8,345 Americans died of melanoma [source: CDC]. About 55,000 people get malignant melanoma in the United States each year [source: California Department of Public Health].

The two other most common types of skin cancer are basal cell carcinoma and squamous cell carcinoma, both of which can be cured if found early but may lead to scarring or other complications.

In this article, we're going to take a look at what you can do on a regular basis to boost your protection from skin cancer. We'll also learn some facts about skin cancer treatment and the value of Vitamin D.

If you're trying to figure out how to prevent skin cancer, poking through your medicine cabinet probably isn't the first thing that comes to mind. But some medications can increase your skin's sensitivity to the sun, causing you to burn faster. Sunburns increase your risk of cancer later, so check with your doctor to learn about any possible reactions with your medications. People with serious pre-existing health conditions, such as HIV, are most at risk. The medications that can produce reactions or additional sensitivity to sunlight vary widely -- everything from antibiotics to antidepressants, cholesterol medications to anti-inflammatories, topical lotions to pills.

One common reaction to sun-sensitizing medication is called phototoxicity, in which certain medications cause an increased sensitivity to sunlight and UV light. This hypersensitivity can result in bad sunburns or blisters.

Some topical medications produce a photoallergic reaction when they come into contact with ultraviolet light. The reaction is usually characterized by a rash that resembles eczema.

A healthy intake of Vitamin D, which you can get naturally through limited sun exposure, has been linked to increased protection against the flu and a host of other illnesses [source: Laurance].

Sunscreen need not just be for a day at the beach -- it can help provide protection every day. With the ozone layer weakening, there's less natural protection against harmful rays, which makes wearing some form of sun protection even more important. Conveniently, many skin products -- like some moisturizers -- include sunscreen. However, these may have far lower SPFs than dedicated sunscreens.

When choosing a sunscreen, look for one that offers broad-spectrum protection. These sunscreens protect against both UVA and UVB rays. UV rays are invisible, and both types can lead to skin damage, even if they don't result in a visible burn.

If you have sensitive skin, look for a sunscreen that's PABA-free. Reapply every few hours, even if the product label claims it lasts longer. It's also important to reapply if you've been in the water or become sweaty.

While non-melanoma skin cancers can be easy to cure, there's still a chance they may spread to other body parts and, in very rare cases, they're deadly.

Most people know to be mindful of skin -- even tan skin -- that's exposed to the sun, but they don't worry as much about the skin that's covered. After all, clothing can protect areas that can't be covered by sunscreen, such as your scalp. A wide-brimmed hat can provide protection to face and neck. Sunglasses will protect parts of your face and eyes, particularly wraparound sunglasses. However, it is possible for UV rays to sneak through your clothes and accessories.

It's also possible to purchase clothing designed to provide additional protection against UV rays. Clothing that comes with an Ultraviolet Protection Factor (UPF) is rated based on the amount of protection it provides, so a UPF of 20 means that the item of clothing allows 1/20th of UV rays to get through.

Besides specially designed high-UPF clothing, there are certain types of regular clothing that provide more protection than others. For example, a plain white t-shirt may have a UPF of 7, while a dark shirt made out of a thickly woven fabric could have a UPF that's well over 1,000 [source: Skin Cancer Foundation]. Clothes lose some protection when they're wet or worn out, but there are also laundry detergent additives that you can buy to literally wash extra protection into your garments.

The most common skin cancer treatment is surgery, though radiation, freezing, heat, lasers and other methods are also used.

Tan skin is often seen as a sign of beauty or health, but it can actually be harmful to one's skin and well-being. The U.S. Department of Health and Human Services has labeled solar radiation a "known human carcinogen" because it can lead to cancer [California Department of Public Health]. Similarly, the International Agency for Research on Cancer has called tanning beds "probably carcinogenic to humans" [source: BBC News].

Tanning beds and sun lamps emit UV rays, making them quite dangerous. They can, in fact, be even more harmful than natural sunlight. People who are regular tanning-bed users before age 30 have a 75 percent higher chance of developing melanoma [source: BBC News]. In the UK, for example, melanoma cases increased 400 percent between 1979 and 2009, and the country is considering banning tanning beds -- or sun beds, as they're known there -- for people under age 18 [source: BBC News].

Alternatives to tanning salons include sunless tanning solutions. They represent a safer, healthier option, but wearing them doesn't replace the need for people to regularly apply sunscreen.

It's important to periodically check yourself for possible skin cancer. Look for asymmetrical, large or unusually colored moles.

Incidences of melanoma have steadily increased in the United States since the early 1980s [source: California Department of Public Health]. But many potential skin cancer victims could easily protect themselves, simply by avoiding the sun.

Skin cancer is most likely to appear on the parts of the body that receive the most direct sunlight, so the face, neck and arms are often among your body's most vulnerable parts. And remember that it doesn't take a sunny day to get a sunburn or for your body to be exposed to harmful UV rays. In fact, you can be burned any time during the day and in many different types of environments, whether sailing on the ocean, skiing on white powdered snow or relaxing underneath an overcast sky. The sun's UV rays can even reflect off of seemingly non-reflective surfaces, like cement.

It's especially important to protect children from excessive sun exposure. While it may be great for kids to play outside and cultivate an appreciation for the outdoors, a lack of sun protection -- particularly between the hours of 10 a.m. and 4 p.m., when the sun's at its most fierce -- can lead to problems later in life.

Also, keep in mind the sun is more severe in summer and spring, if you're living near the equator and when you're at high altitudes. The sun is like many other aspects of nature: It can be beautiful and inspiring, but we should guard ourselves against its ill effects.

For more information about keeping your skin safe and healthy, check out the links on the next page.