Albinism and the Eyes 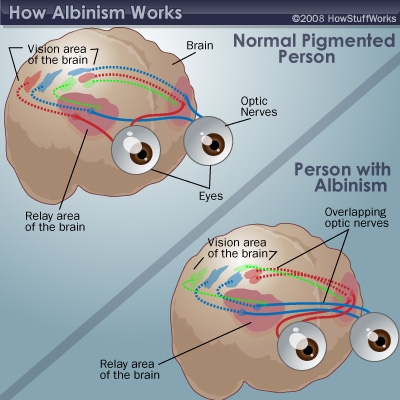 With insufficient melanin, the skin not only looks lighter but lacks natural protection against the sun. During tanning, we turn a toasty brown because melanocytes send more melanosomes to protect our skin cells. People with albinism who don't make melanin can't tan. Others whose mutations allow some melanin production can tan. When melanin can't block all the UV rays, some penetrate our cells, causing sunburn. People with albinism sunburn far more easily than people with normal pigment -- for those who make no melanin, almost instantly [source: Ciocca].

We mentioned earlier that people with albinism often have imperfect vision. In albinism, the eye produces too little melanin during development. This causes parts of the eye to form abnormally, compromising vision.

Here's what happens: The iris, or colored ring in our eye, opens and closes the pupil. The retina, or screen in the back of the eye, collects the picture. Normally, melanin darkens both parts, allowing the iris to block light and the retina to absorb it. In albinism, the iris lets light through, and the retina poorly absorbs it. Light scatters in the eye, causing photophobia, an uncomfortable or painful sensation in bright light.

Albinism affects one's ability to see images as well as one's sensitivity to light. Our fovea, a pit in the center of the retina, is packed with millions of cones that provide color sensitivity to the eye. We need cones to see details clearly when reading, recognizing a face or watching television. During development, melanin helps our fovea form properly, but its exact role is unknown. In albinism, the pit may not form, and the area may have too few cones [source: Kelly]. Print may blur, and the eyes, continuously seeking a clear picture, may make involuntary motions -- a condition called nystagmus [source: Weber]. The head may wobble to compensate.

Albinism also affects the optic nerves. Our optic nerves connect our eyes to our brain. In embryonic development, melanin tells growing nerves exactly where to go in the eye. The nerves, directed by melanin, pass through an integration center on each side of the brain. Half cross -- left eye to right brain -- while half go to the center on the same side of the brain. This gives each center input from both eyes. The brain then overlays the two eyes' images, making a three-dimensional picture. In people with albinism, there is a shortage (or complete lack) of melanin production, and the directions go astray. As a result, almost all of the optic nerves cross. The pictures seen by the two eyes are never combined. The brain quickly adapts, leaving a single picture but some trouble seeing depth. In addition to nystagmus, some people with albinism have strabismus, where one eye appears to move independently of the other. It's related to misrouted optic nerves [source: King et al].

Our eye's surface must be curved properly for sharp focusing. In albinism, errors in eye development may cause the cornea to curve irregularly, causing nearsightedness, farsightedness or a distorted image, called astigmatism. The lens may focus light unevenly on the retina, also causing astigmatism. Without correction, people with albinism see in the range of 20/60 -- seeing details at 20 feet that should be seen at 60 feet -- to 20/400, which in the United States is legally blind [source: Gronskov]. People with albinism aren't blind in the colloquial sense of seeing nothing. If people with albinism experience complete blindness, chances are that blindness is due to an unrelated condition.

In the next section, we will discuss the many different types of albinism and how it is formally diagnosed.

Why do people with albinism have red eyes?

They don't. This is just a light trick. Enough light passes through the pupil, translucent iris and retina that you can see through the retina to the blood vessels underneath.