Can You Detect Albinism? 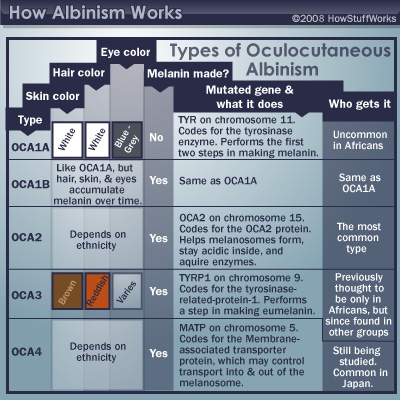 Albinism is a rare condition that affects a wide range of ethnicities all over the world.

Most cases of albinism are diagnosed in newborns. Doctors look for light hair and skin compared to unaffected siblings, parents and a person's ethnic group. Of course, many people have these traits. Doctors confirm with an eye exam, looking for a translucent iris and retina, vision in the albinism range, and other eye abnormalities mentioned on the previous page. In milder forms of albinism, the eye looks virtually normal. Doctors may order a DNA test for albinism mutations [source: Gronskov].

In addition to albinism itself, doctors can also test for other conditions that list albinism as a side effect. These conditions include:

Babies can be diagnosed before birth if a couple has had a child with albinism and doctors know which mutations have caused it. Doctors remove cells from the placenta, called chorionic villi sampling, at 10 to 12 weeks of pregnancy to test DNA. Later on in the pregnancy, doctors can test DNA by removing cells from the amniotic fluid, a procedure known as amniocentesis [source: Gronskov].

The upcoming section will discuss solutions to common skin and vision problems for people with albinism.

Ocular albinism is inherited in an X-linked pattern because the gene is on the X chromosome. Men inherit the mutation from their mothers, and because they display the condition after inheriting one mutated X chromosome, they are affected more often than women.