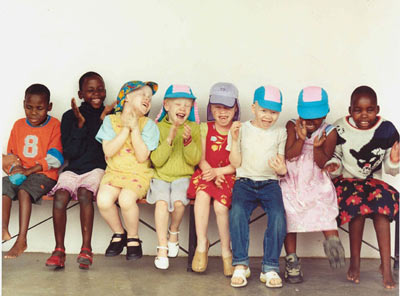 A group of students playing at the Siloe School in South Africa.
Rick Guidotti of Positive Exposure

Most children with albinism can attend mainstream schools. Parents should contact the school system before kindergarten to plan for their child. Classroom accommodations include video magnifiers, large-print textbooks, audio tapes to supplement reading, large-print copies of board notes, and use of computers for writing projects [source: International Albinism Center].

Despite these gestures, people with albinism still face teasing, stares, well-meaning but ignorant questions, feelings of otherness and isolation, and myths about the condition [source: NOAH]. Parents should equip children early to cope, recommends June Waugh, a child and family counselor affiliated with the National Organization for Albinism and Hypopigmentation (NOAH). Strategies include discussing albinism and a child's feelings, developing a positive attitude toward albinism, practicing responses to bullies, and meeting others with albinism.

Once you have made friends with people with albinism, you may wonder if it's okay to call your new pals "albino" or a similar informal name. Many people with albinism don't think so, seeing themselves as a people first, not a condition, and preferring "person with albinism." Yet opinions differ. "If I were to be completely politically correct, I would have to say I was born with a condition called femaleism, African Americanism, and albinism. But that's silly: isn't it?" writes Virginia Small, former member of NOAH's board of directors, on her website.

Despite vision impairment in those with albinism, playing sports rarely becomes an issue. "The 'can't do' list is small… squash, tennis, [and] badminton," writes Martin Lang, a member of the Albinism Fellowship, about sports for his ten-year-old daughter with albinism [source: Lang]. Sports with small balls can be difficult for people with albinism, but these can be adapted using sound [source: Winnick].

In the final section, we will discuss albinism in other organisms. How rare is it in the animal kingdom? Can these special animals survive in the wild?

"She liked the sense of speed and the wind in her hair," writes Martin Lang.