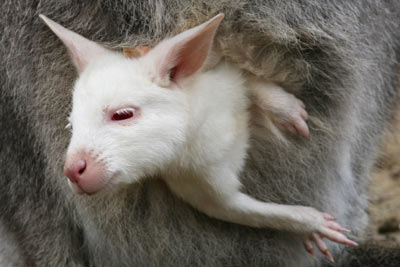 Animals with albinism like this wallaby usually stay in the shade to protect skin from sunlight.
Guiseppe Cacace of Agence France Presse/Getty Images

Every animal -- from cockroaches to apes -- makes melanin and can have albinism. Such animals fare poorly in the wild, says Chad Staples, a curator at Featherdale Wildlife Park in Doonside, Australia. "Their rate of survival is virtually zero," says Staples. "Predators easily pick them out of a group. Families and social groups can exclude them because to every other member, they look foreign." In captivity, albino animals fare better. At Featherdale, albino wallabies are trained to stay in the shade, and the hypopigmented blue-tongued lizard (which loses skin color over time) soaks up necessary UV rays with special modulation to reduce cancer risk. When it comes to mating, some species fare better than others. The albino peacock attracts females just fine, but suitors shun the albino kookaburra, Staples says.

The occurrence of albinism runs the gamut across the animal kingdom. According to the Missouri Conservationist, published by the Missouri Department of Conservation, at least 300 species in North America have had at least one reported instance of albinism. Researchers observe albinism occurs once out of every 10,000 mammal births. Albinism is much more common in birds, occurring once in every 1,764 births. Diluting or spreading out a species' gene pool greatly reduces the chance of albinism [source: Miller].

Albino animals make prized -- and pricey -- pets. Albino lab animals, like the BALB/c mouse are inbred to make litters genetically similar; albinism is a side effect [source: Faletra]. These animals were also prized as laboratory research subjects, although that assessment has come under fire lately due to their rarity and genetic mutation and is now considered inappropriate by some [Source: Leathers]. However, they continue to be cherished in the wild. In some areas of Missouri, white squirrels with partial albinism have become quite popular with locals who pamper them and protect them from hunters and other predators [source: Miller].

Despite the dangers of the wild, many animals with albinism, like this whitetail deer, find themselves coddled by humans.
Jeffrey Phelps of Getty Images

For more information on albinism, take a look at the links on the following page.