What is harlequin ichthyosis?

Browse the article What is harlequin ichthyosis? 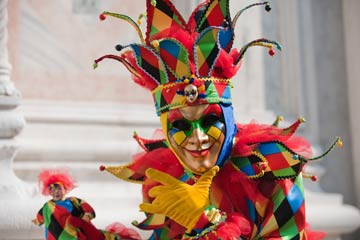 The skin is our largest organ, and probably the most underappreciated. It protects us against viruses, bacteria, pollution, the elements, and, let's not forget, it holds our insides on the inside and keeps them from mixing with the outside.

On top of all that, it's because of our skin that we're able enjoy a full range of motion. Tough yet springy, normal skin springs back into shape when pressed, twisted or pulled. It has complex mechanisms that allow for oil to coat the skin, providing further protection. It helps us maintain a consistent body temperature and serves as our detection system for identifying hot and cold. And, like the inside of a military-grade vehicle, it can be hosed off and come out clean and looking as good as new.

That is, when the skin works properly. There are many diseases that can keep the skin from doing its job, some more serious than others. One genetic condition severely impairs all of the skin's functions that we normally take for granted. It's called harlequin ichthyosis.

This disorder, also called ichthyosis fetalis, prevents the skin from forming a protective layer. Instead, it produces hard, scalelike, diamond-shaped plates separated by deep ridges. The deep ridges between the distinctive plates severely compromise the body's first line of defense against toxins, bacteria and pollution, and the hard plates disrupt the skin's usual system of constantly replacing and sloughing off dead skin cells.

Harlequin ichthyosis not only creates mayhem within the body's immune system, it also drastically affects the development and shape of facial features. Babies born with harlequin ichthyosis have mouths that are pulled open, almost resembling an exaggerated, clownlike smile, hence the name "harlequin." The infant's ears may be practically absent, and he or she may also have eyelids that look like they're turned out. But these physical changes aren't just an aesthetic concern -- the mouth's unusual structure makes it difficult for newborns to eat, for example, and the eyelids can't protect the baby's eyes.

The Rare and Deadly Harlequin Ichthyosis

Ichthyosis is a group of genetic skin diseases. Harlequin ichthyosis is the most severe of the lot, and it's very rare -- only around 100 cases have been reported around the world.

Harlequin ichthyosis begins with a gene responsible for lipid transportation. It mutates, hardening a protein called keratin in the outer layer of the skin. That's where the large, pronounced scales come in. The mutated gene is result of a genetic autosomal recessive pattern -- meaning both father and mother passed on the same recessive mutated gene to the child.

The disease doesn't just affect a baby's face -- it also extends to the arms, legs and torso, making it difficult (and often impossible) for the newborn to or move around freely. The hardened scales across the baby's chest make it difficult for him or her to breathe, and the skin's unusual structure causes water loss and leaves the body unable to regulate its temperature. The ridges between the plates of the skin nullify the protection provided by the skin, since the plates don't "seal" together. This introduces a high risk of infection, which is often the cause of death for someone with the disease.

Until fairly recently, the rate of systemic infection for newborns with harlequin ichthyosis was so high that few survived longer than one or two months. Advances in medicine and neonatal care have increased the rate of survival. Retinoids regulate skin cell production and turnover, and they also increase the skin's pliability, meaning that a newborn with harlequin ichthyosis now has the opportunity to blink, move his or her limbs, and eat.

But even with medical advances, it's still tough going. Children with harlequin ichthyosis are at high risk for malnutrition and delayed development due to several factors: difficulty eating, loss of vitamin D and protein through the skin, and less exposure to sunlight due to skin sensitivity.

While better treatment options may become available in the future, the current long-term outlook for those born with this disease is still uncertain.