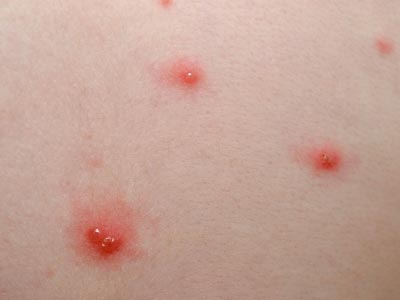 Chicken pox is a familiar sight to many of us. Luckily, it's not usually dangerous.
©iStockphoto.com/AlesVeluscek

­The varicella-zoster virus (VZV) is also known as human herpes virus 3 (HHV-3). It can cause two different types of infection: chicken pox and shingles. Like all herpes viruses, VZV is highly contagious. Children normally catch it by being in direct contact with someone who has chicken pox (even if they don't have the rash yet, they're contagious beforehand). They can also get it by coming in contact with the coughs and sneezes of an infected person.

After being infected, it can take up to three weeks to develop the lesions, which usually finish completely forming within a week. They've often been described as a "dew drop on a rose petal" because there are red areas with small blisters on top. Most chicken pox lesions are on the face and torso, although they can show up anywhere.

After a week or two, the lesions are usually completely scabbed over and no longer considered contagious. Antihistamines and lotions, creams and ointments can help the itching; so can lukewarm baths with oatmeal powder or baking soda. Some children run fevers and should be treated with acetaminophen instead of aspirin to avoid the possibility of Reye's syndrome. Chicken pox isn't really dangerous in healthy children. After one bout of chicken pox, the immune system generally suppresses it -- you can't contract chicken pox twice.

Adults who get chicken pox usually experience more severe symptoms and often prescribed the antiviral Zovirax to lessen the duration. They may also have more extreme complications, such as skin infections or pneumonia. If a pregnant woman contracts chicken pox, she can pass the virus on to her fetus. Fetal varicella syndrome can result in brain and organ damage. Like any other person with a weaker immune system, if a baby contracts chicken pox, he or she is at higher risk for complications like pneumonia.

A varicella zoster vaccine, Varivex, has been available since 1995. Many schools today require kids to get it along with the other typical childhood vaccines. Adults who have never had chicken pox may also get the vaccine. It prevents chicken pox infections in up to 90 percent of people, but doesn't provide lifelong immunity, so boosters are necessary [source: American Academy of Family Physicians].

If they do have chicken pox, however, a small number of people can also contract shingles later in life. We'll look at that next.