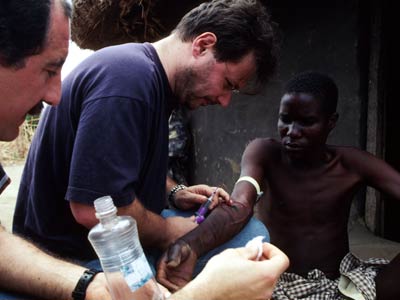 ­Kaposi's sarcoma herpes virus (KSHV), or human herpes virus 8 (HHV-8), is spread through fluid transmission and can also be passed from mother to baby during pregnancy. It's mainly associated with a specific type of cancer called Kaposi's sarcoma. Although Kaposi's sarcoma is usually found in AIDS patients, there are several different types. The tumors found in each type usually look the same, but the rate at which the cancer spreads and who it affects can differ.

Epidemic Kaposi's sarcoma is considered an AIDS-defining illness. Because of this, it's also called AIDS-associated Kaposi's sarcoma. The HIV infection allows HHV-8, which lies dormant in the immune system and would normally be fought off, to manifest in the form of dark purple or black raised tumors on the head, neck and trunk. They may also be found in the mucus membranes and spread to internal organs. There's also a rare non-epidemic form of KS usually found in gay or bisexual men who don't show any signs of HIV infection.

Some patients who are immunocompromised due to organ transplants may contract transplant-related Kaposi's sarcoma. Organ transplant recipients are often on medications that suppress the immune system to keep the body from rejecting the new organ. This allows HHV-8 to become active. About one in 200 transplant patients in the United States will develop this type of Kaposi's sarcoma [source: American Cancer Society].

Classic or Mediterranean Kaposi's sarcoma is a rare, slow-spreading disease most often found in older men with Mediterranean or Eastern European backgrounds. It's often found in conjunction with another type of cancer, usually a lymphoma. The other two types of KS are associated with people living in Africa. African lymphadenopathic Kaposi's sarcoma is a very aggressive form of the disease found in young children. Sometimes there are no external lesions; the lymph nodes and organs are affected. Most children affected with it don't live more than a year after diagnosis. Young to middle-aged African men may have a slower-spreading type called African cutaneous Kaposi's sarcoma.

There is no cure for any type of Kaposi's sarcoma, but it can be managed successfully with drugs and other therapies. Patients with epidemic KS may slow down the progression of their disease with HAART (highly active antiretroviral therapy), a form of drug therapy that slows the progression of AIDS and its related diseases.

Most people who are infected with KSHV don't develop Kaposi's sarcoma. The majority of Kaposi's sarcoma patients in the United States have AIDS-associated KS, so preventing it means practicing safer sex to avoid HIV infection.

To learn more about herpes, condoms and your immune system, take a look at the next page.