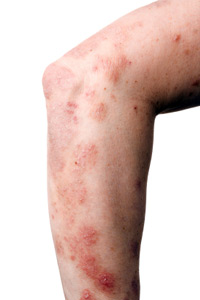 The name "nummular dermatitis" may seem like a mouthful of a medical condition. With a name like that, it may sound like a rare, complex disease, but it's actually a form of dermatitis, one of the most common skin conditions. Nummular dermatitis, also known as nummular eczema, is a condition that causes itchy, red oval- or coin-shaped lesions to form on the skin, usually on the legs, arms, feet, hands and torso.

The exact cause of the condition is unknown, but there are many factors that seem to increase the risk of developing nummular dermatitis, including:

Although the exact cause of nummular dermatitis is unknown, its diagnosis is usually straightforward. Typically, a dermatologist will visually examine the skin and, if necessary, take a small biopsy. If this isn't enough to make a diagnosis, or if the dermatologist thinks that allergies may be the cause, patch testing, a method of testing the skin for allergies, may be used [source: American Academy of Dermatology].

But how do you know if you should be tested for nummular dermatitis? Read on to learn more about its symptoms.

Nummular dermatitis often begins with extremely dry skin. Patches of blister-like spots develop, and eventually the rash forms into patches. The coin-shaped patches, which are the defining symptom of the condition, are usually well-defined circles. This causes the rash to form a ring shape that looks similar to a ringworm infection. The rash eventually may form a yellowish crust, especially if it becomes infected. After a few days, the lesions and surrounding areas may become dry and scaly [source: Miller].

The patches of lesions, which can be red, pink or brown, are usually itchy and sometimes cause a burning or stinging sensation that worsens at night. The number and size of the patches and the duration of the outbreak can vary [source: American Academy of Dermatology]. After the first appearance of lesions, nummular dermatitis can become chronic and recur frequently. The lesions may last a few weeks and then disappear, but they can come back several weeks or months later [source: American Osteopathic College of Dermatology]. The lesions often reappear in the same places as the old ones, and even though the lesions may heal, they often leave scars [source: Miller].

It can be difficult to distinguish nummular dermatitis from other types of dermatitis, but similar treatments are used to treat various types of the condition. Read on to learn more about these treatments.

What's in a Name?

The unique coin-shaped lesions are the most distinctive factor in distinguishing nummular dermatitis from other forms of eczema. In fact, that's what gives it its name. The word "nummular" comes from the Latin "nummus," meaning "small coin" [source: MedicineNet].

While there's no cure for nummular dermatitis, there are several ways to treat and control its symptoms. Once an outbreak occurs, prescription-strength cortisone ointments can be applied to the area to help heal the skin and soothe the itchiness. Coal tar ointments may also be recommended because coal tar reduces inflammation, scaling and itching [source: New Zealand Dermatological Society]. In severe cases, doses of cortisone may be taken, or phototherapy -- ultraviolet light treatment -- may be used [source: American Academy of Dermatology]. These treatments can help heal nummular dermatitis outbreaks; however, lesions on the legs -- especially below the knees -- may take longer to heal and are more likely to scar [source: American Academy of Dermatology].

But there's good news for people with nummular dermatitis: Simple preventive measures may be the key to avoiding future outbreaks. Extremely dry skin is often a trigger, so it's important to hydrate the skin using concentrated moisturizers or lotions. Limit your showers to one five-minute shower a day and don't use extremely hot water because this can dry out the skin [source: Mayo Clinic]. Use a humidifier in your home to keep moisture in the air. And wear loose-fitting cotton clothing washed in unscented detergents to avoid unnecessary skin irritation [source: American Osteopathic College of Dermatology].

To read more about dermatitis, check out the links on the next page.

Topical ointments are helpful in treating skin irritations, but sometimes a skin treatment isn't enough. If the itchiness interrupts or prevents sleep, oral antihistamines can be taken to treat the discomfort.