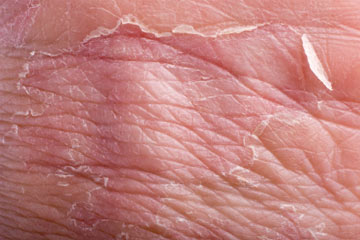 Staph bacteria normally live on your skin and in your nose without causing problems. However, skin damage, surgery or an injury may allow the bacteria to overcome the body's natural protective mechanisms and cause infection. Skin infections -- such as impetigo or cellulitis -- are the most common type of infection caused by staph, or Staphylococcus aureus [source: Stöppler]. But in rare cases, scalded skin syndrome, a serious condition that makes skin appear burned, can develop in newborns and young children [source: Dhar].

Being a new parent is stressful enough without seeing what appear to be burns all over your child's body. To make matters worse, scalded skin syndrome can be life-threatening, so immediate treatment is necessary. While the majority of scalded skin syndrome cases are seen in children under the age of six, infections can also occur in adults with renal failure or immune deficiency disorders [source: Dhar].

Proper diagnosis of scalded skin syndrome can be difficult -- the disease's symptoms can resemble other skin conditions -- and a misdiagnosis could be fatal. Typically, a doctor will use a biopsy and a bacterial culture to identify the condition [source: Children's Hospital Boston]. As always, the best thing you can do is educate yourself. Knowing the symptoms and the proper treatments for staphylococcal scalded skin syndrome will help you be prepared in the event that you or your child is ever infected.

Keep reading to find out exactly what causes the infection.

Seeing what looks like a burn spread across your skin or a loved one's skin can be traumatic and alarming -- especially when you know a burn hasn't actually occurred. Upon diagnosis of scalded skin syndrome -- which is also known as Ritter von Ritterschein disease -- your confusion may turn to surprise when you learn that the painful condition is actually a staph infection.

Staph infections are caused by different strains of the same bacteria, Staphylococcus aureus. Some strains of the bacteria, such as the one that causes scalded skin syndrome, are toxigenic -- meaning they produce toxins. Scalded skin syndrome occurs when these bacteria release two different exotoxins: epidermolytic toxins A and B, which are commonly referred to as ET-A and ET-B. These exotoxins cause blisters to form and layers of skin to separate and slough off -- giving the appearance of severely burned skin [source: New Zealand Dermatological Society].

While scalded skin syndrome primarily affects children, adults are the ones who carry the bacteria responsible for the infection. In fact, as many as 40 percent of healthy adults may have Staphylococcus aureus on their skin or in their body and not know it. Carriers don't exhibit any symptoms; however, they can pass the bacteria on to others. New mothers can pass the bacteria to their baby while breastfeeding, and adults who work with children can cause outbreaks in nurseries and other childcare facilities [source: King].

Scalded skin syndrome is a life-threatening condition, so it's vital that it be identified quickly. Keep reading to learn what symptoms are associated with the infection.

College dorms are the perfect setting for a staph infection outbreak. Staph easily moves from person to person, and any time you share towels and linens with another person, you put yourself at risk. Combine that with the close quarters of a dorm, and the odds are stacked against you [source: Hirsch].

There's no mystery behind the name scalded skin syndrome -- it literally makes skin look as if it's been burned. In newborns, it usually begins in the diaper area and then spreads to other parts of the body. In older children, it's likely to initially appear on the arms and legs.

Symptoms usually begin with red, sensitive skin that eventually erupts in blisters. The blisters tend to be large and fluid-filled, and the skin around them may be crusted. The blisters will likely rupture, leaving the skin moist and painful, and the skin will eventually begin to peel off in large sheets [source: New York-Presbyterian]. The condition comes on quickly and has the ability to spread over the majority of the body within 24 to 72 hours [source: Dhar].

Aside from the obvious physical symptoms associated with scalded skin syndrome, there are several other symptoms commonly linked to it. Prior to and following the peeling skin, patients are likely to experience a fever, chills, weakness and fluid loss [source: New York-Presbyterian]. Because skin helps protect us from infection, the condition also puts these patients at risk of developing sepsis, a bacterial infection of the bloodstream and body tissue [source: Dhar].

If you think you or your child may have scalded skin syndrome, you should seek medical attention immediately. Keep reading to learn how doctors diagnose and treat this serious condition.

A Carbuncle of Furuncles

A furuncle is a boil caused by an infected hair follicle -- similarly, a carbuncle is a cluster of furuncles. Both are painful symptoms of a staph infection [source: Hirsch].

The first step in treating any disease is a proper diagnosis. Scalded skin syndrome is diagnosed with a biopsy and a bacterial culture. A biopsy involves looking at a piece of skin under a microscope, and a bacterial culture involves growing the bacteria in a Petri dish -- both methods are used to determine what's causing the medical condition [source: New Zealand Dermatological Society].

Once scalded skin syndrome has been diagnosed, treatment begins with an IV to help with fluid loss. Next, doctors employ topical treatments similar to those used on burn victims, and parenteral antibiotics -- medications given through IV -- are administered. Staphylococcus aureus is typically immune to penicillin, so patients receive different antibiotics [source: King]. Patients may have to spend several days in a hospital's burn unit, but with proper treatment, the condition should clear up in five to seven days. Fatal cases of scalded skin syndrome are very rare in children [source: Kim].

For more information on scalded skin syndrome, its symptoms and its treatments, see the links on the following page.

Hospitals are intended to be places of healing, but more than 2 million people contract a staph infection each year while being treated at hospitals. In fact, in 1992, the cost of hospital-contracted staph infections in the United States was more than $4.5 billion [source: Mattox].