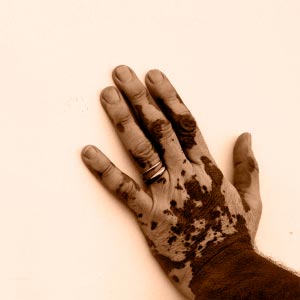 Vitiligo occurs when areas of the skin can no longer produce the pigment melanin. See more pictures of skin problems.
©iStockphoto.com/Piccerella

Skin, the body's largest organ, is also perhaps the most noticeable of all a person's features. Its characteristics -- thickness, number of hair follicles, color and sensitivity -- vary depending on what part of the body it covers, and they help create the first impression we make on others. But skin also performs some vital body functions, such as helping to regulate temperature and storing fat, vitamin D and water [source: University of Maryland Medical Center]. Additionally, the way skin looks can give clues as to the health and well-being of the body it covers.

Sometimes, however, even when the body underneath may be fine, the color or condition of skin can change. Imagine, for example, that your skin stopped evenly producing melanin, the pigment that gives it its color. Your skin's new blotchy, discolored appearance might alter the way you look at yourself -- and probably the way others look at you, too. Case in point: Michael Jackson. The rumors that the late pop star had bleached his skin in order to look lighter began because he reportedly had vitiligo (pronounced vit-i-LI-go), a condition that inhibits the skin's normal melanin production. Jackson's famous one-gloved look was, some say, an early attempt to mask the symptoms of vitiligo [source: CNN].

Skin pigment resides in the epidermis, the thin outer segment of the three layers that make up this versatile, protective organ. The epidermis itself is made up of three sub-layers, and this is where vitiligo does its work. Melanin doesn't even reach the middle layer of skin, called the dermis, and this condition doesn't appear to affect any other organs or areas of the body.

Vitiligo changes the face a person shows to the world. Many consider Michael Jackson's story one extreme example of the effects of this rare skin disease. But what exactly causes vitiligo? Why does it happen, and can we do anything to halt or reverse its damage? Read on to find out. 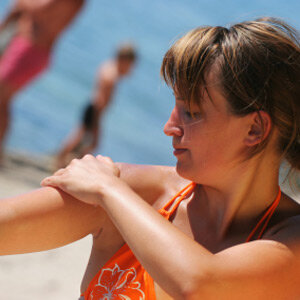