Can doctors treat acne with lasers? 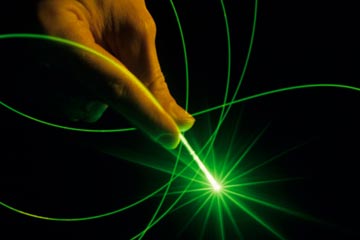 There's no shortage of acne treatments. People around the world are going to bed tonight with faces covered in toothpaste, antibiotics, salicylic acid, lemon slices and any number of other proven and unproven substances. And no wonder: Acne can affect practically anyone, from infants to adults. While it affects some people more than others and is most common during puberty, most people will have to deal with it at some point -- or many points -- in their lives.

One common (and usually effective) way to battle acne is with antibiotics, either in a pill or applied to the skin. Antibiotics work by destroying bacteria that have accumulated in the hair follicle to the point of damaging it. The drugs also calm the body's immune system response, reducing redness and swelling.

However, the bacteria that multiplies and grows in clogged follicles is a common skin bacteria, Propionibacterium acnes (or P. acnes), that's always present. Since its home is your skin, it doesn't like it when an invasive force comes on the scene to wipe it out. And, occasionally, the bacteria puts up a fight and builds resistance to the effects of antibiotics. People who use topical antibiotics irregularly -- less than twice daily, every day -- are at the highest risk of developing resistance to antibiotics.

Common over-the-counter treatments -- such as benzoyl peroxide or salicylic acid (often mixed together into one product) -- can be effective, but they don't work for everyone. Benzoyl peroxide isn't an antibacterial, but in addition to drying the face, it helps reduce bacteria by oxygenating pores. It isn't without its downsides, though. It can cause extreme dryness and peeling, as can salicylic acid, which helps the follicles clear themselves of dead skin cells.

Another treatment has emerged in recent years, but this one battles acne with advanced technology: laser treatment. How do lasers reduce acne breakouts? Are they dangerous? Are they right for you? Keep reading to find out.