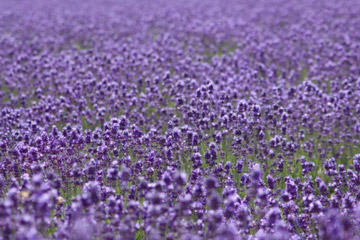 The pleasant appearance and aroma of lavender is well known. Humans have used lavender for centuries in various medicinal applications. One common use is to add lavender oils to water before washing. In fact, the word lavender comes from the Latin word levare, which means to bathe [source: Ernst et al.].

While the most common use of lavender is to help treat anxiety and relieve stress through aromatherapy, some people also use it to treat minor skin conditions or injuries. But is there any evidence that such treatments work?

The answer is that very little scientific evidence exists to support lavender's use as a treatment for skin conditions. But it's also true that there have not been many scientific studies on the matter. In the few studies that have published results, no analgesic or pain-killing effect was found to be linked to lavender. Some studies showed that subjects responded equally well to lavender oils, synthetic oils and an inert substance added to bath water.

Lavender also seems to have a slight sedative property. You may find the scent soothing or relaxing. So while the actual medicinal effect of lavender on your skin may be minor, you might not care about it very much. There may also be a placebo effect. If you expect lavender to improve your condition, you may feel better after applying it. There doesn't need to be a physical, medicinal effect to make you feel better.

This is where using lavender gets tricky. The Food and Drug Administration in the United States doesn't classify lavender as a drug. That's why the FDA doesn't regulate lavender. But lavender oil does contain active ingredients that can affect your skin. Since there's no regulation, it's hard to tell how much of these active ingredients are in any particular product containing lavender oil. Some might have harmless amounts of oil in them. But others could have concentrations of oil that could cause skin irritation if not diluted first.

Like all herbal remedies, it's important to remember that just because lavender is natural doesn't mean it's an effective treatment for all ailments. It may help soothe you, but if you have a nagging skin condition, it's best to seek the advice of a doctor.

Learn more by following the links on the next page.

How does lavender work in skin cleansers?
Natural Skin Care: 5 Important Herbs in Face Wash
How to Cure Dry Skin With Aromatherapy

Frostbite Basics
What are chilblains?
Can you get rid of stretch marks?