Browse the article How to Identify a Skin Rash 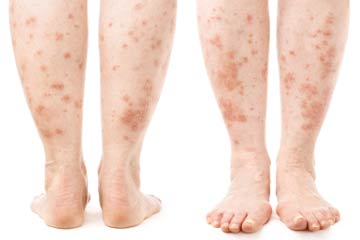 Skin Problems Image Gallery Bacteria, a fungal infection, an allergic reaction -- what could be the cause of this rash? See more pictures of skin problems.
©iStockphoto.com/Ziga Lisjak

Somehow, an itchy, red rash has appeared on your skin and you're racking your brain to figure out how it got there. As you ponder your pruritic predicament, the rash seems to be getting larger. Is your imagination getting the best of you, or could it be something serious?

In general, a rash is defined as a change in your skin's color or texture that is different from normal [source: WebMD]. When you spot a rash, you probably wonder where it came from. Although your skin does have natural defenses, things like viruses, fungi and parasites can breach those defenses and cause you to break out in a rash. Other common causes of rashes include reactions to certain medications and exposure to heat [source: Mayo Clinic].

A number of factors can influence where and how you get a rash. Your age can be a factor, as aging skin is particularly prone to certain skin rashes, such as shingles, while small children are prone to rashes from chicken pox and roseola [sources: National Institute on Aging, New Zealand Dermatological Society]. Similarly, your lifestyle can be a factor. For example, athletes tend to get hot and sweaty, which makes them more prone to conditions like heat rash [source: Mayo Clinic].

Some rashes will go away on their own -- poison ivy, for example, should go away within one to three weeks [source: Mayo Clinic]. Meanwhile, others can be serious and need the attention of a doctor. How do you know if a rash needs medical attention? If you can't identify the rash or its cause, if you have a fever, if the rash is painful or it just won't go away, then you should visit a physician.

If you've examined your rash and you want to gather some more intel before heading off to the doctor, read on to find out about the different types of rashes.

So, you've got a red, raised, super itchy rash and you want to figure out what it is. Unless you've been walking barefoot through poison ivy, it's going to take a little research, and probably a physician, to solve the puzzle. But you might be able to narrow down the possibilities by considering a few things. Basically, most rashes fall into one of the following categories:

To determine your rash type, consider what it looks like and what you've been exposed to such as any new medications, potential irritants or allergens. Then try comparing that information with descriptions of some common rashes, such as:

While these are fairly common, there are some rashes that are even more so. Keep reading to see what they are and how they are likely to manifest on your skin.

It's Getting Hot in Here

There are actually several types of heat-related rashes you can get, one of which causes bumps that sting, and another that doesn't hurt, but does cause fluid-filled bumps. Though intertrigo is categorized separate from heat rash, it is often caused or at least exacerbated by heat. To avoid heat-related skin conditions, try to keep your skin adequately clean and cool [source: Mayo Clinic].

While rashes themselves are not unusual, some rashes are more common than others are, including the following:

Even though they may feel like they're hanging on forever, particularly if they're itchy or uncomfortable, all of these rashes tend to be short-lived. But not all rashes are that accommodating, so read on to find out about rashes that hang around or recur.

Diaper rash is something every child's parent wants to avoid. A baby's wet diaper is like a bacterial bed and breakfast, inviting all sorts of nasty guests to bother your baby's bottom. Like other rashes, diaper rash can range in severity from minor redness to sores and infections. The best way to avoid diaper rash is by keeping your baby's bottom as dry as possible. If your baby does wind up with an overly rosy rear, change the baby's diapers often, make sure you use a mild detergent to wash the baby's clothes and let the baby go diaper-free whenever possible so his or her bottom can get fresh air. You can also try using a cream on your baby's bottom to help heal and protect the skin. With proper care, the diaper rash should clear up within a few days. If not, give your pediatrician a call [source: Cleveland Clinic].

It's bad enough to have to deal with a rash when it's a short-term condition like, say a reaction to poison ivy. But some rashes are even more irritating because either they never go away or, if they do, they keep coming back to annoy you.

Some common culprits in this category are:

Now that you've investigated some of the more common recurring skin rashes, read on to find out some of the causes of these and other rashes.

Often confused with acne, rosacea is actually a chronic skin condition that's marked by inflamed skin and red bumps that can be mistaken for pimples. Like atopic dermatitis and psoriasis, rosacea has periods where it flares up. If you notice that your skin looks like it has acne, but doesn't respond to regular acne treatments, and it seems to be on a cycle of flare-ups, check with your doctor to see if you might have rosacea. Although there's no cure, your doctor will be able to help you manage your symptoms [source: Mayo Clinic].

If the idea of getting an itchy, red rash doesn't sound appealing, it would seem that the best-case scenario would be to avoid getting a rash at all. However, that's not as easy as it sounds. Even if you have good personal hygiene, which certainly helps to keep your skin healthy, there are still ways that rash-causing agents can latch onto your skin.

Some known causes of rashes are:

With so many causes out there, it seems like everyone should be covered with rashes. Fortunately, that's not the case, but in the event that you do contract a rash, read on to find out some of the treatments available.

Exanthems are a special class of rashes that can make you feel particularly miserable. They spread across the entire body, covering large patches of skin, and are typically accompanied by fever, headache, aches, and pains. These nasty rashes can be caused by a virus, bacterial infection or drug reaction, among other things. [source: New Zealand Dermatological Society].

With the number of possible causes, conditions and diseases out there, it seems almost inevitable that you'll one day find yourself with inflamed, unhappy skin. Whether you contract poison oak on a day hike, have a reaction to that new medication you're taking or you pick up ringworm while working at the local cat shelter, there's no need to worry that your skin woes will remain forever. There are many treatment options, even if your rash is chronic:

The bottom line is that although the skin does manage to protect itself quite well, there are hosts of potential invaders and irritants that can breach its defenses. If you have a rash, it's best to see your doctor so that he or she can identify the culprit, treat it and return your skin to good health.

For more information, follow the links on the next page.

Is your rash contagious?

Rashes can look fairly gnarly, particularly if you have blisters that are oozing or sores that are weeping. With all that scary-looking skin, you might wonder if rashes are contagious. In truth, it really depends on the type of rash you have. Some rashes that look particularly bad, like severe cases of shingles and intertrigo, aren't contagious at all. But ringworm, which can sometimes just be a small, innocent-looking patch, is very contagious [source: Mayo Clinic]. Your physician will be able to tell you if you're contagious.