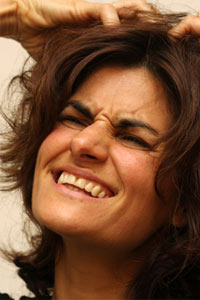 Scalp fungus can be more difficult to treat than other forms of ringworm. See more pictures of skin problems.
©iStockphoto.com/Kevin Dyer

Scalp fungus is commonly referred to as ringworm, which is a bit of a misnomer because the condition is not caused by worms. Rather, it has its name because of the round rings that appear on your scalp. The skin on infected areas may appear normal near the center of the round patch, but it will probably look irritated near the edges. These areas may be reddish in color and feel sore or itchy. They may even develop blisters [sources: Lewis].

Ringworm is more common among children than adults, although anyone can get it. It occurs on the scalp or, on an adult, even underneath facial hair. Some cases even infect the eyebrows and eyelashes, but this is rare. Other fungal infections on the body are caused by ringworm, too. Jock itch and athlete's foot, caused by fungus that thrives in sweaty places like locker rooms and gym shoes, affect the groin area and feet, and they're also forms of ringworm [source: Lewis].

The main difference between scalp fungus and fungus elsewhere on the body is that scalp fungus can be trickier to treat, so you need to see a doctor if you think you may be infected. Just as it's easy to pick up athlete's foot by following in the bare footsteps of someone else who has the condition, scalp fungus is contagious through contact. So think twice about trying to hide a ringworm outbreak under a hat -- anyone else who wears it could become infected, and you could also re-infect yourself.

Preventing scalp fungus is easy once you know what causes it. For more tips, read the next page about the causes of scalp fungus.

Common household pets, such as dogs and cats, can carry ringworm, which causes scalp fungus. You can pick up the condition just by touching these animals -- ringworm can transfer to you from contact with an animal's fur or skin. If a dog or cat has a bald spot, it could be a sign of a ringworm infection [source: Centers for Disease Control].

While you should keep in mind the risks posed by animals infected with ringworm, you're more likely to pick up the condition from another person. Ringworm can live for several months on items like hats, scarves, brushes, combs and other items that touch your scalp. To avoid infection, try to avoid sharing these items with other people. Even if someone's scalp looks healthy, he or she could be carrying scalp fungus without showing any symptoms [source: WebMD].

The best way to steer clear of scalp fungus is to avoid situations where you could pick it up from another person or animal. Good hygiene is important, too -- scalp fungus thrives in areas that are damp and moist, so be sure to wash the sweat out of your hair when you come back from a workout. Also, be careful if you have a cut or scrape on your scalp, because this is a prime spot for the fungus to enter your body. Be sure to wash any cuts or scrapes thoroughly [source: Berman].

Despite all your best efforts at prevention, sometimes it just doesn't work. For information on how to treat scalp fungus, read the next page.

Down on the Farm

While dogs and cats are the most common ringworm carriers, they aren't the only animals that can be infected. Pigs, horses, cows and goats can pass the fungus to people, too. If you spend time around any of these animals, be sure not to touch any areas missing fur. If you absolutely must handle an animal, clean up properly afterwards, and don't touch your scalp or face until you've washed your hands [source: Centers for Disease Control].

Whether you contracted scalp fungus from an animal or another person, treatment options remain the same. You'll need to see a doctor, because to get ringworm off of the scalp and out of your system, you have to take antifungal medication. This medication comes in either pill or liquid form, and you'll need to continue taking it for four to 12 weeks.

Antifungal pills are often accompanied by an antifungal shampoo. Unfortunately, the shampoo alone will not cure you of ringworm, so you'll have to keep taking your medicine until the infection clears up. If you think you have been exposed to scalp fungus but are not showing symptoms of the condition, use an antifungal shampoo for two weeks to prevent the ringworm from settling into your scalp [source: WebMD, Berman].

To diagnose scalp fungus, your doctor will most likely only need to look at your skin. The doctor might take a sample of the affected skin or hair to further examine under a microscope [source: American Academy of Family Physicians]. Another test, called a Wood's Lamp test, uses a blue, ultraviolet light to determine whether or not a patient has ringworm. It's usually done at the dermatologist's office, in a dark room. A doctor will typically hold the light about four or five inches (10.2 to 12.7 centimeters) from the affected area of skin while looking for any changes in color [source: Lewis].

While you do need to see a doctor if you have scalp fungus, there are things you can do at home to prevent and contain the condition. For tips on home remedies for scalp fungus, read the information on the next page.

Treating and diagnosing scalp fungus has come a long way. In the past, for example, doctors used to treat the condition with radiation. While there may be some side effects to modern antifungal medication, these pale in comparison to the long term health problems, such as thyroid cancer, that developed from using radiation treatments to cure scalp fungus [source: American Caner Society].

While scalp fungus can't be completely cleared up without medication from a doctor, there are many things you can do at home to speed up the recovery process.

Get rid of any items that have touched the affected area. This includes combs, brushes, hats, headbands, barrettes or anything else that has come in contact with your scalp. If you are using a hat or scarf to hide your condition in public, wash the hat after each use to keep from re-infecting yourself. Additionally, wash your sheets and pillowcases every day. That may sound like a hassle, but it will prevent the fungus from living there.

Wash your hair regularly with an antifungal shampoo. Afterwards, make sure your scalp is dry. Also, be sure to clean your scalp immediately if you get sweaty, because scalp fungus grows well in damp environments. Your antifungal shampoo should contain selenium sulfide or ketoconazole as ingredients.

Make sure other family members and pets get tested if they have been exposed. Contrary to some myths, you do not need to shave your head if you have scalp fungus. If you do shave your head, be very careful about the disposal of hair and the razor. You don't want infected hairs floating around your bathroom [source: WebMD].

Most likely you'll be able to diagnose scalp fungus yourself because of its distinctive round, bald, reddish itchy patches. A doctor can quickly confirm your self-diagnosis, and the sooner you see one, the sooner you can begin treatment and rid yourself of the condition.

To learn more about treating and diagnosing scalp fungus, follow the links on the next page.

What about fungus on other parts of my body?

Fungus on the scalp or beard is one of the hardest fungi to treat. If you have a ringworm infection elsewhere on your body, such as athlete's foot or jock itch, you may be able to rid yourself of the infection with over-the-counter medication without seeing a doctor. However, if the condition worsens or you don't see improvement, see a medical professional [source: Lewis].