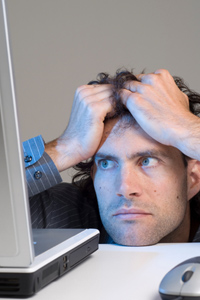 Stress has many of us reaching for our hair.
© iStockphoto.com/flashgun

Many idioms in the English language use human hair as a means of describing emotions and conditions. If you let your hair down, you're going to let loose and get crazy. If you're caught by the short hairs, you don't have a means of escape. If something has made your hair stand on end, then you're terribly frightened. And if you're frustrated or angry, you may vow to pull your own hair out.

For some people, that last one is more than an idiom. It's estimated that about 2 to 4 percent of the population has trichotillomania, or an uncontrollable urge to pull out one's own hair [source: Landau]. Those with trichotillomania usually pull primarily from the scalp, eyebrows and eyelashes, but they may also pull hairs from their legs, arms or pubic area.

The term trichotillomania was coined and the symptoms were described in 1889, but the condition only became formally recognized as a disorder in the late 1980s, when the Diagnostic and Statistical Manual of Mental Disorders classified it as an impulse control disorder. Because trichotillomania is a relatively new condition and has received very little mainstream press, many people may be unaware that their behaviors constitute an actual disorder.

Additionally, trichotilliomania manifests itself differently in each person. For some people, the condition may be very mild -- people might pull their hair unconsciously while they read, watch television or lie in bed. For others, the condition is all-consuming. These people may feel tension or stress that is only abated when they pull out hair; the relief may prove to be short-lived, however, as guilt over pulling out the hair only leads to stress that causes them to pull out more hair. Some may set aside times to ritualistically go over the hairs on their bodies and pull some out, while other say that they pull out certain hairs that feel different or bother them. Sometimes the pulling is characterized as a self-soothing mechanism for those who are extremely depressed and anxious, while sometimes it's something that seemingly happy, healthy people engage in for no apparent reason.

In other words, there's no one type of person that is at risk for trichotillomania; however, those with the condition do share some symptoms, which we'll investigate on the next page. 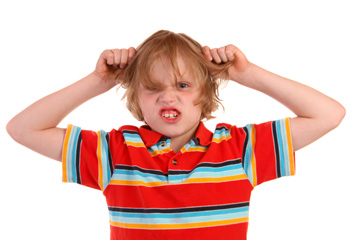 If someone pulls out their hair, large bald spots and missing eyebrows and eyelashes would seem to be a clear indicator of the action. However, people with trichotillomania go to great lengths to disguise what they've done, as many feel shame or guilt over destroying their hair, which is so often prized as a symbol of beauty or power. Many invest in wigs, hats and kerchiefs to hide bald spots on their heads, while eyebrows may be painted on (eventually, hair will grow back, but years of pulling will do permanent damage to the follicles).

These people may avoid swimming or walking around on a blustery day at all costs, and some avoid all forms of intimacy and medical care. A woman, for example, may refuse to see a gynecologist so that no one sees that she pulls from her pubic hair. If a bald spot can't be hidden properly, some trichotillomania sufferers have claimed they were enduring cancer treatment rather than admit that they pulled the hair out themselves [source: Landau].

After pulling out their hair, many people with trichotillomania play with it in some way. The most common thing to do with the pulled hair is to chew on it or eat it, a practice known as trichophagia. When a person eats a lot of hair, trichobezoars, or hair balls, develop. As the trichobezoars get larger, they can cause vomiting, constipation and other, often serious gastrointestinal ills. Trichobezoars may need to be removed surgically.

Repeatedly pulling out one's hair can cause injuries to the arms, such as carpal tunnel syndrome. In addition, many people with trichotillomania also have depression and anxiety disorders. Because trichotillomania is often linked with these conditions and other negative feelings, like stress and loneliness, you may think that trichotillomania as something that only certain people need to worry about. On the next page, though, we'll consider how the causes of trichotillomania may be more complex. 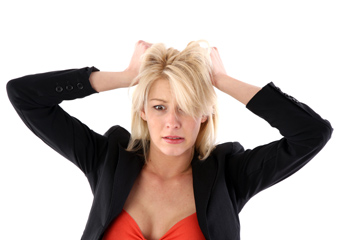 Most cases of trichotillomania are thought to involve women, but women may just be more likely to seek treatment.
© iStockphoto.com/Stockphoto4u

When a person begins pulling their hair out at adolescence, the initial trigger may be a stressful event, and the hair-pulling continues to be a self-soothing mechanism during times of stress, anxiety, fatigue or frustration, not unlike nail-biting. For some people, though, the trigger isn't necessarily stress or depression, and hair-pulling can occur at anytime, stressful or not. The wide array of situations in which trichotillomania presents itself makes it difficult to classify as a condition. For example, some doctors liken it to obsessive-compulsive disorder (OCD), but the repetitive hair-pulling is driven more by impulses, rather than obsessive thoughts. In that way, it's more like a tic.

This connection was borne out in 2006, when researchers at Duke University found that a small percentage of people with trichotillomania had mutations in a gene called SLITKR1 [source: Duke University]. SLITKR1 has also been linked to Tourette syndrome, in which people experience tics like eye-blinking or twitching. Even though mutations were only identified in a small number of cases in the Duke study, it suggests a neurological underpinning for a condition that's often just blamed on negative feelings.

If it's clear that a person is suffering from both depression and trichotillomania, though, doctors will often suggest anti-depressants as part of the course of treatment. Selective serotonin reuptake inhibitors (SSRIs) don't address the impulse to pull hair, but they may help address an underlying cause. The drug clomipramine, sometimes diagnosed in cases of OCD, has curbed the hair-pulling urge in some patients. In 2009, researchers found that N-Acetylcysteine, an antioxidant found in health food supplements, curbed the impulse to pull one's hair significantly in comparison to subjects given a placebo [source: University of Minnesota]. (Before beginning any new medication or supplement, patients should speak to their doctor about possible interactions with other medications.)

In addition to medication, cognitive behavior therapy (CBT) is also recommended for those with trichotillomania. The goal of CBT is to learn to replace one behavior with another, so first patients are taught to be aware of when they pull their hair, be it absent-mindedly in front of the television or in times of immense stress. Then, therapists will suggest behaviors that they do instead of hair-pulling when those situations arise in an effort to alter the habit. Some people may make simple modifications like wearing gloves in their sleep.

With the rising awareness of trichotillomania, there are an increasing number of support groups available for people with trichotillomania, but be aware that many doctors may not have seen an actual case in their office yet. No single treatment has been proven to work for everyone, and it may take some mixing and matching of these treatments to find the one most effective for a person.

At a Glance: Scalp Sores
What is trichodynia?
Does my scalp affect the way my hair looks?